1000-bedded hospital in Bina likely to start by May 15 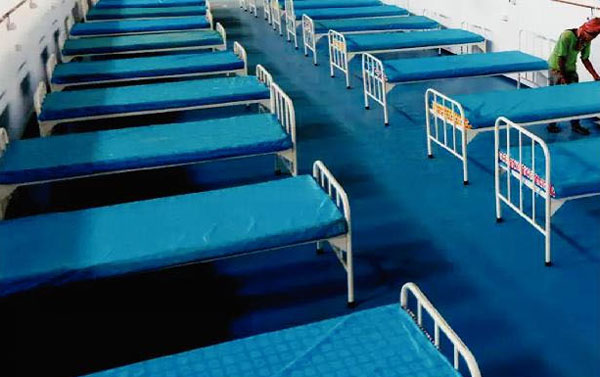 Chronicle Reporter, Bhopal
The 1000-bed hospital at Village Chakka near Bina Agasod Refinery is a symbol of service to humanity. This is not an official work, but definitely give yourself a sacrifice in this. Urban Development and Housing Minister Shri Bhupendra Singh said this in the review meeting of the hospital. On this occasion, Bina MLA Shri Mahesh Rai, Collector Shri Deepak Singh, Superintendent of Police Shri Atul Singh and officers of all departments were present. Minister Shri Thakur said that the Chief Minister's ambitious plan for prevention and control of corona infection as a service to humanity, we have to complete it before May 15 and start it soon.
Minister Shri Singh said that due to the establishment of this 1000-bed hospital, Corona infected patients of Raisen, Vidisha districts including Sagar district will also be able to get treatment easily and they will be healthy. He said that no officer or public representative of the hospital should think of it as a government work, only act as a service to humanity and complete it as soon as possible and start treatment. He said that Madhya Pradesh government is constantly trying to win from this transition. He said that all the people should stay at their homes following the guidelines of the government and follow the protocol in letter and spirit.
Minister Shri Singh said that for the smooth functioning of the hospital, the government has appointed an IAS officer as Additional Collector and the responsibility of the entire work is being done under its supervision. He said that all officers and public representatives have been engaged for the prevention and control of corona infection, they will also have to work with utmost vigilance to avoid infection. Mr. Singh also inspected the works.

Expedite construction work
Collector Shri Deepak Singh asked all the officers to expedite the construction work of the hospital and make all the works quality so that the treatment can be started by starting the hospital from May 15 as per the intention of the government. He also instructed that a road map should be prepared to ensure arrangements for transportation from Bina to and from the hospital.

Superintendent of Police Shri Atul Singh said that after the hospital started, there would also be a need of police force for which they have ensured the posting of police force by constructing a post here. He said that the traffic police will also be ensured to increase traffic here.
Collector Mr. Singh said that 200 toilets are to be made for 1000 bedded hospitals. Install fiber seats in all toiletts, plan sewerage and build a drainage system. CC concrete work should be done on 1500 sqm floor soon. Prepare the base before placing the pebber block and then place the block. Admin block, storage block, attendant block for family of patients, kitchen block for cooking and packing for Akshay Foundation, well organized parking including refreshments for visitors such as tea biscuits, fruit, milk etc.