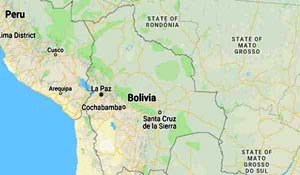 La Paz, At least 12 people were killed and 30 others injured when a passenger bus, they were travelling in, crashed into a boulder along a rural highway in southwest Bolivia. The accident occurred on Friday between Cochabamba and Potosi, Police commander Col Vladimir Lazo was quoted as saying by Chinese state news agency Xinhua. The injured were rushed to local hospitals, while rescue workers retrieved bodies at the scene, he said. "We are carrying out an investigation to determine the causes of the accident,whether it was recklessness or mechanical failure," said Mr Lazo.