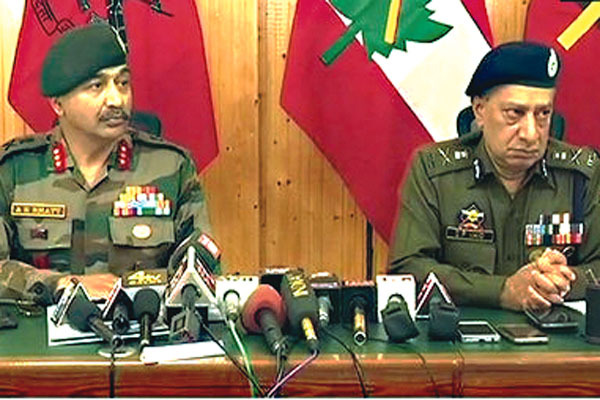 Agencies, Awantipora Thirteen militants, including top commanders, and three Army jawans were killed in three separate encounters on Sunday in south Kashmir, where a Special Police Officer (SPO) was killed and another was injured by gunmen on Saturday. Two civilians were also killed while about 40 others were injured in security force action in south Kashmir, where internet services have been suspended since late last night to prevent spread of any rumours. “Bodies of five militants have been recovered in Kachdoora in Shopian, taking the total number of militants killed in three encounters in south Kashmir to 13,” official sources said. Director General of Police SP Vaid had earlier tweeted that three militants were killed in Kachidoora. However, he had informed that the number of the militants killed in Kachdoora could rise after the rubble of the house, where the ultras were trapped, was removed. The house was totally damaged in the encounter. It was reported that four to five militants were holed up there. Official sources said that one more Army jawan succumbed to his injured, taking the total number of soldiers killed in Kachdoora encounter to three. However, official confirmation was awaited. Besides these five at Kachdoora, seven militants were killed in an encounter at Dragad in Shopian while one ultra was gunned down in Anantnag’s Peth Dialgam, where one militant was caught alive after he surrendered. “Two of the seven militants, identified as Rayees Thoker and Ishfaq Malik, killed at Shopian’s Dragad were responsible for the killing of Lieutenant Ummar Fayaz in May last year. All the seven militants killed in Dragad have been identified as locals and their bodies have been claimed by their kin,” Dr Vaid, flanked by Lt Gen AK Bhatt, GOC Army’s 15 Corps and IG CRPF and IG police, told reporters during a press conference here on Sunday afternoon. A police spokesperson said that the slain militants have been identified as Zubair Ahmad Turay, Ishfaq Ahmad Malik, Yawar Itoo, Nazim Ahmad Dar, Adil Ahmad Thoker, Ubaid Ahmad Malla and Rayez Ahmad Thoker. Giving details about the operations, the DGP said, “Today encounters took place at three places, out of which two have concluded and one is underway.” Asserting that senior police officials tried to persuade militants to surrender, Dr Vaid said, “I don’t think that security forces in any part of the world would carry out operations in this manner.” ‘I want to make a special mention of Peth Dialgam in Anantnag encounter, where our SSP made a special effort which is unheard of in any other part of the world. He called the family members of the militants and facilitated exchange of words between the militants and their family for about 30 minutes in an effort to persuade them to surrender,” the DGP said. But, he said unfortunately one militant didn’t heed to the advice of his family and instead fired upon security forces. “The security forces had no other option but to retaliate. The militant was later killed. The other one, we caught him alive without harming him,” he said. A Hizbul Mujahideen militant, Rouf, was killed in an encounter with security forces while another one was caught alive after he surrendered at Peth Dialgam in Anantnag on Sunday. Dr Vaid said unfortunately two Army jawans were also martyred while several personnel, including jawans of Army, CRPF and police, were injured. “The two Army jawans were killed in Kachdoora, where the encounter is underway,” he said.“One civilian was also killed along with seven other militants killed in Dragad while another civilian was killed in Kachdoora. The civilian killed at Dragad was the owner of the house in which the militants were hiding,” he said. The DGP said there are about 25 civilians, who have received pellet injuries during the clashes near the encounter sites while six civilians have received bullet injuries.