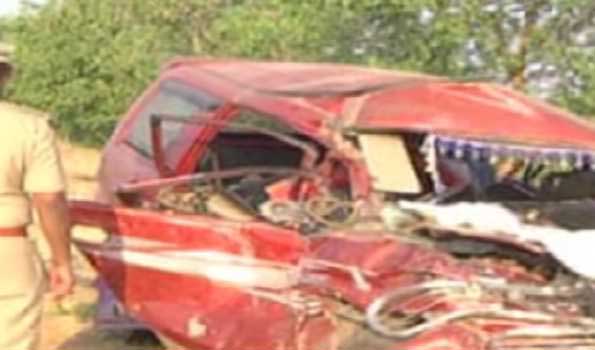 Tumakur,  Thirteen people were killed and four others injured when a car in which they were travelling collided against an SUV coming from the opposition direction on NH75 near Avaragere in Kunigal taluka in the district in the wee hours of Saturday. The deceased were identified as Manjunath (35), Thanuja (25), a nine-month-old baby girl, Gowramma (60), Ratnamma (52), Sundar Raj (48), Rajendra (27), Sarala (32) and Prashanya (14) who were in the four-wheeler and three others who were travelling in the car, Lakshmikant (24), Sandeep (36) and Madhu (28). Others yet to be identified, police added.
Thirteen persons were travelling in the SUV and were natives of Hosur in Tamil Nadu. They were returning after pilgrimage to Dharmasthala, while the car was heading towards Dharmasthala from Bengaluru. The driver of the car lost control, hit divider and then veered off and rammed into the SUV, which was coming from the opposite direction, around 0230 hours. The injured have been shifted to a hospital in Nelamangala taluk in Bengaluru Rural district.Amruthur police have registered a case in this regard