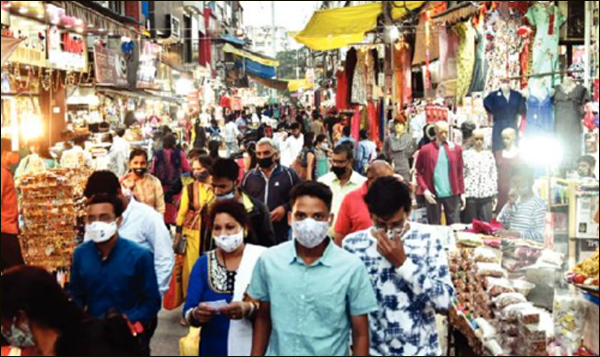 Admin to act tough against those flouting Corona norms

Chronicle Reporter, Bhopal, The speed of corona infection has picked up in the state. After 40 days, more than 1500 positive cases were found in MP. The state witnessed as many as 1528 new Covid-19 cases on Friday. A meeting of traders and district officials was held in New Market to discuss measures to curb Covid-19.

In Bhopal, 378 new cases were found while one person succumbed to the deadly virus. Similarly, Indore saw 313 new cases and four deaths. Bhopal and Indore continue to be the worst-hit districts with 28,738 and 36,623 cases respectively so far.

The active cases are also again increasing after witnessing a downward trend for a few days. Presently, 9,800 coronavirus patients are undergoing treatment at different hospitals in the State. A total of 887 more patients recovered and were discharged on Friday pushing the number of recovered cases to 1,75,089.

Gwalior has recorded 13,618 cases. A total of 726 coronavirus patients have died in the worst-affected Indore district and 503 have died in Bhopal. Ujjain has recorded 99 deaths and 3,772 positive cases, Burhanpur recorded 795 while Neemuch has 2,509 positive cases. More than 27,000 samples were tested in Madhya Pradesh on Friday. The State has significantly ramped up testing in the past few weeks.

Those not wearing masks penalized

As the number of corona positive patients increases, the strictness of administration has resumed. The teams of the district administration made challans of more than 100 people who did not apply masks on Thursday, while the Municipal Corporation took challan action against 144 people. Now this toughness will increase further. Social distancing and punctuality will be followed in the markets too.

Action against those who flout corona norms

Lavania said people who are not following the rules will be made a volunteer. They will stand at the crossroads, distribute masks and appeal on mike. Other rules, including timing of opening and closing of markets, will be strictly followed.

Lavania said larger containment areas as before are no longer needed. He said the administration will increase sampling in areas where more patients are found.