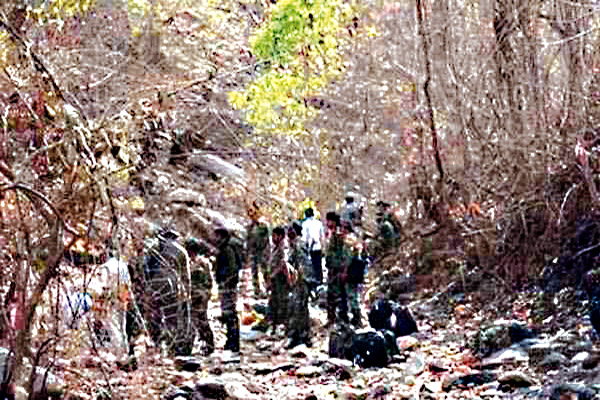 Agencies, Nagpur As many as 16 Naxalites were killed on Sunday in an encounter with the police at Tadgaon forest area in Gadchiroli district of Maharashtra, sources said. Based on specific input about the movement of Perimili Dalam near Tadgaon, the anti-naxal forces conducted search operation in the area, where they were targeted with heavy firing, sources said. The encounter took place at about 150 kilometers from police headquarters in Bhamragad tehsil of Gadchiroli district. The deceased include Sinu, a divisional committee member from South Gadchiroli division of CPI (Maoist) , and Perimili Dalam commander Sainath, who is also said to have been recently elevated to divisional committee member, sources said. First time two DVC members have been killed in one operation, said sources.This is a major operation against Naxalites in recent time and till now, 14 naxals have been gunned down and many senior naxal cadres are also suspected to be killed in this encounter.. Fourteen bodies have been recovered from the spot, which include Sainath and Sinu.However, the identity of the others could not be established till the filing of the report. The combing operation, which started in the morning, are still on at Tadgaon forest in Bhamragad,sources said. According to sources, the Tendu leaves season has begun which leads to many naxals cadres entering into Gadchiroli district to extort money from Tendu leaves contractors. Tendu leaves are the main source of income for naxals and helps them to run their operations.