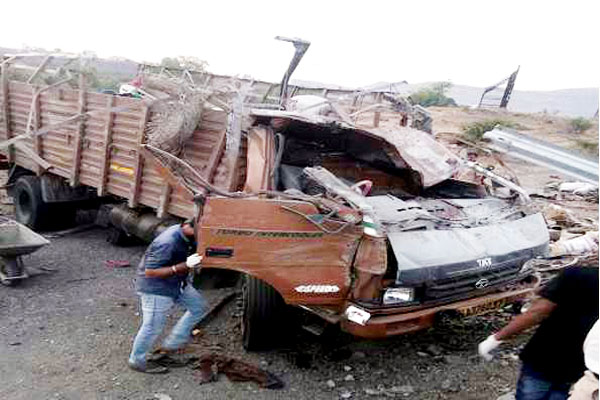 Pune, As many as 18 labourers were killed and 15 others seriously injured, when a truck overturned near Khambataki ghat here in the wee hours of Tuesday. Seventeen of them died on the spot while another succumbed to his injuries in the hospital, police said. According to highway police, 18 labourers have been killed so far and several others injured when a truck hit a barricade on the Pune-Satara highway near Khandala. The labourers were travelling from Bijapur in Karnataka to Pune. The accident took place when the driver reportedly lost control over the vehicle and it rammed into a barricade near Khambatki ghat before overturning, said Satara Superintendent of Police Sandeep Patil said. The road near the Khandala tunnel has a sharp turn which has led to several accidents in past and considered to be very dangerous. Mr Patil said the police rushed to the spot and took injured to a nearby hospital immediately after the accident. The police are now probing into the cause of the accident and are suspecting that the driver might have lost control due to sleep deprivation. The name of the deceased have been identified as Madhvi Anil Rathore (45), Shankar Rekhu Chavan (55), Santosh Kashinath Nayak (32) Manglabai Indu Naik (42) Krshna Sonu Pawar (60) Kiran Vitthal Rathore (15) DevaBAI Mohan Rathore (27), Sangita Kiran Rathore (26), Devanand Narayan Rathore (35), Prinkya Kallu Rathore (18),Kallubai Vitthal Rathore(35), Tanvir Kiran Rathore (2 year), Vitthal Kheru Rathore (40), Arjun Ramesh Chavan(30), Shrikant Basu Rathore (38), Sinnu Basu Rathore(30), Mehbub Rajaram Attar (55) and Majid Mehbub Attar (25).