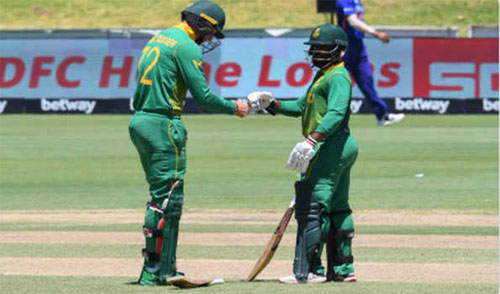 India need 297 runs to take an early lead in the three-match series.

The new ball man Jasprit Bumrah had a wayward start, conceding a wide and then four leg byes. The fast bowler managed to struck early for India as Malan (6) was caught behind.

Bumrah and Bhuvneshwar Kumar, for whom the series is important to cement his place in the 50-over squad, kept things tight for De Kock and Bavuma.

Ravichandran Ashwin, who was playing his first ODI since July 2017, missed a chance to strike in his first over. De Kock sliced the ball but Shreyas Iyer put him down at backward point. The off-spinner finally got De Kock for 27. The batter looked to play a cut shot but got beaten and the ball knocked his off-stump.

Soon, a direct hit from debutant Venkatesh run out Aiden Markram for four. Bavuma and Van der Dussen slowly rebuild the innings and helped the hosts reach the 100-run mark after 23 overs.

The duo brought up their 50-run partnership off 46 balls on what looked like a difficult pitch to bat on. The South Africa skipper Bavuma registered his third ODI half-century.

The pair soon reached their 100-run stand to ensure South Africa remain strong in the game. An overthrow took the hosts to 203/3 after 39 overs.

Bavuma raised his bat to welcome his second ODI ton off 133 balls. Soon, Van der Dussen too brought up his century off 83 balls.

Bumrah finally broke the partnership between the South Africans in the penultimate over as Bavuma (110 off 143 balls) holed out to long-on. Van der Dussen remained unbeaten on 129 off 96 deliveries.