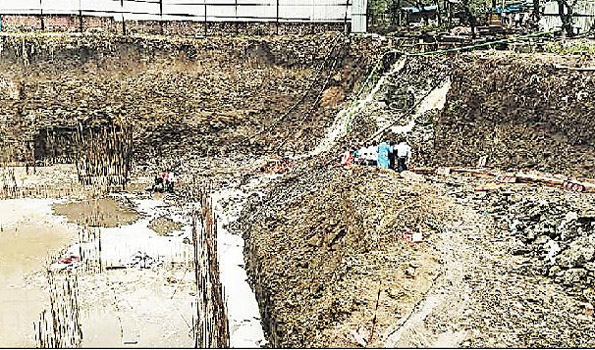 Chronicle Reporter, Bhopal
In Bairagarh area, 20 labourers working in the multi got buried after the wall of the drain behind the old Sindhu Talkies collapsed. Two labourers died in the accident after they were buried under the rubble. As soon as the information of the accident was received, the officers of the corporation, additional commissioner, team of Bairagarh police, zonal officers and fire personnel reached the spot and 18 laborers were evacuated safely. But 2 of them could not be saved.
On the other hand, the relatives of the deceased allege that the accident happened due to the serious negligence of the multi owner. Workers were being made to work in a two-storey deep basement without any protection.
According to the information, behind the old Sindhu Talkies of Bairagarh, a two-storey deep basement was being dug in the multi of Radhesham Chawla and Kamal Chawla. In which about 20 laborers were working. There is a drain near the basement. The wall of the drain collapsed due to heavy rain. During this accident, 20 laborers working in the multi being built near the wall were hit by the debris.
Police and administration began relief and rescue operations immediately after reaching the spot and about 18 laborers were evacuated safely. While two laborers died due to being buried in the rubble. A laborer who was buried in the debris in the rescue was rescued.
One of the deceased has been identified as Mansoor Uddin. The relatives of the deceased allege that the laborers were being made to work in the basement without any protection during the rainy season. The family demands that the deceased have small children. They should be helped with the amount by the government. As of now, one of the deceased buried under the debris has not been identified. Due to frequent rains, the rescue work is getting difficult.