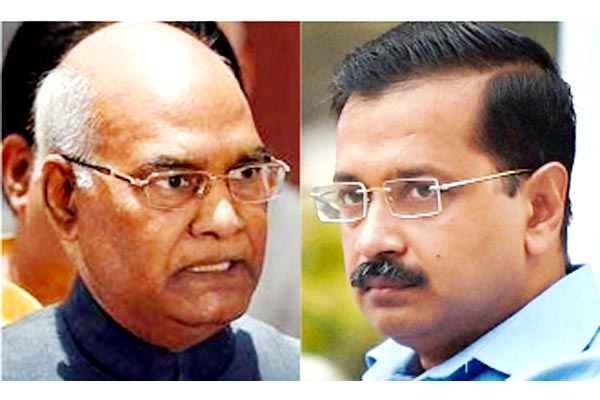 Agencies, New Delhi In a big blow to the ruling Aam Aadmi Party (AAP) in Delhi, 20 MLAs of the party were today disqualified for holding office-of-profit with President Ram Nath Kovind approving the Election Commission recommendation in this regard. AAP said it would challenge the decision in court.A Gazette notification of the Government said the 20 AAP MLAs stand disqualified in office-of-profit case. “In the light of the opinion expressed by the Election Commission (EC), the 20 members of the Delhi legislative assembly have been disqualified,” a notification issued by the law ministry quoted the President as saying. In a communication to the President on Friday, the EC had asked for disqualification of these MLAs on the grounds that they held offices of profit while occupying the post of parliamentary secretaries between March 13, 2015 and September 8, 2016. The disqualification of the MLAs, however, does not pose threat to Kejriwal government in Delhi, which has 66 MLAs in the 70-member Assembly. Reacting to the government notification, Deputy chief minister Manish Sisodia said AAP will go to court over the matter. Delhi minister Gopal Rai said they had hoped to approach the President to give the party a chance to present their side.“Now we received this news. AAP will knock the doors of HC and even SC if the need be,” Rai told a TV channel. In a statement posted by AAP Twitter handle, chief minister Arvind Kejriwal said,’’they really tormented us, got false cases registered against our legislators, launched a CBI raid against me, but they never got anything. In the end, they finally got 20 of our MLAs disqualified.” In a video posted on AAP Twitter account, Kejriwal , hoping thst ‘truth will prevail’, said, ‘’God knew that three years down the line, they will disqualify 20 of our MLAs, and that’s why it gave us a whopping 67 legislators.’’ Addressing a press conference, AAP leader Ashutosh termed the development as “unconstitutional” and “dangerous for democracy.”” ‘’ President Ram Nath Kovind should himself contemplate if he has enhanced his stature in history as the President of the Republic of India by signing to disqualify AAP MLAs ?,” he said. The disqualified MLAs are Alka Lamba, Adarsh Shastri, Sanjeev Jha, Rajesh Gupta, Kailash Gehlot, Vijendra Garg, Praveen Kumar, Sharad Kumar, Madan Lal Khufiya, Shiv Charan Goyal, Sarita Singh, Naresh Yadav, Rajesh Rishi, Anil Kumar, Som Dutt, Avtar Singh, Sukhvir Singh Dala, Manoj Kumae, Nitin Tyagi and Jarnail Singh. The development does not threaten the AAP government in Delhi as it has 66 MLAs in the 70-member assembly. It reduces AAP’s strength in the Delhi assembly to 46, way above the majority mark of 36 in the 70 member state assembly. The BJP and the Congress have , however, demanded Delhi chief minister Arvind Kejriwal’s resignation on moral grounds. AAP chief spokesperson Saurabh Bhardwaj said there was a political conspiracy against the party, alleging that the “BJP through its agents seriously compromises the prestige of the EC just to divert the attention of the nation from its all round failures,’’he said. In June , 2016 , the EC , in response to a petition by the congress, had said the AAP MLAs “did hold de facto the office of parliamentary secretaries”. The AAP had, in March, 2015, appointed the MLAs as Parliamentary secretaries . After protests over the appointments , the Kejriwal government sought to shield the MLAs by excluding the post of parliamentary secretary from the ambit of office of profit laws. But former President Pranab Mukherjee refused to approve the law and referred a private petition in the matter to the Election Commission. Meanwhile , reacting to another private petition, the Delhi high court struck down the posts of parliament secretary in September, 2015. Following the HC order, the MLAs petitioned the Election Commission that it shouldn’t entertain the office of profit case against them because the Delhi high court had already set aside their appointment as parliamentary secretaries.