2020 decade is for fulfilling aspirations of Bihar: Modi 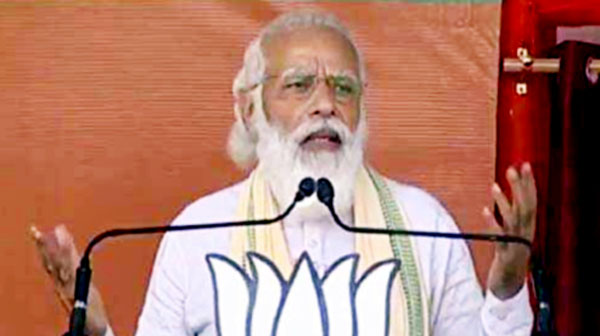 Patna, Nov 03 ( UNI) Cautioning the people of Bihar from "double Yuvraajas" who were having greedy eyes on the public money, Prime Minister Narendra Modi on Tuesday claimed that nepotism, Jungle Raj, hooliganism, arrogance, scams were getting defeated and maintained that the last decade was for fulfilling the requirements of the people of Bihar and the 2020 decade is for fulfilling their dreams and aspirations for which he exhorted them to vote in favour of NDA, capable of translating their aspirations into realities.

Mr Modi, while addressing a rally in Forbesganj in Araria district tried to connect with the people in local dialect by giving reference to the regional spiritual leaders and great literature Fanishwar Nath Renu, said that during the last decade NDA government led by Nitish Kumar worked on providing Infrastructures including good urban and rural roads, electricity, cooking gas connections, lavatory facilities in each and every household and improvement in law and other situation and now the decade 2020 is for giving the new leap to the aspirations and dreams of the people. He said that in the current decade the NDA would strive to fulfil the aspirations of illuminating the each and every house, providing cooking gas through pipelines, pucca house to every poor, on the expansion of Airports and other activities aimed at improving the quality of life of the people.

Comparing the RJD-Congress regime with that of NDA rule, Mr Modi alleged that the opposition which looted Bihar was now again eyeing upon the public money with greedy eyes. He said the people of Bihar have understood that the opposition was only interested and indulged in personal and their family development whereas as the NDA was committed for the development of Bihar where rule of law is prevailing and democracy, development and transformation would emerge as victorious ample indications for which is available after the first phase of the polling.