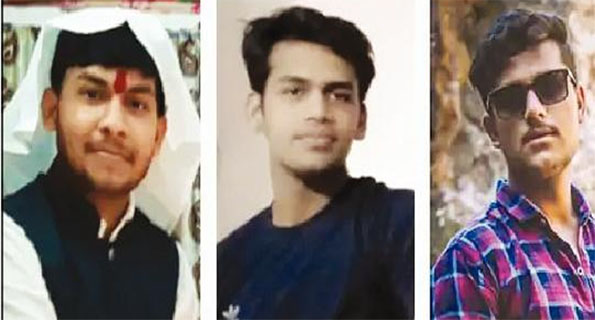 Chronicle Reporter, Bhopal
A major accident happened in Vidisha on Sunday. Three youths died after drowning in a 100 feet deep pool of a picnic spot known as Mini Pachmarhi near Halali Dam. Five friends from Bhopal had come here in the morning for a picnic. The accident is said to have happened due to slipping of the foot of one of the youths. Four friends plunged into deep water to save a friend. Two were rescued, while three drowned.
17-year-old Amit Patel, 19-year-old Abhay Sharma and Mohit Sharma, residents of Ashoka Garden, Bhopal, have died due to drowning. Their bodies were taken out from the waterfall near Chhota Pachmarhi. At the same time, 17-year-old Abhishek Sharma and Abhishek Singh, residents of Bhim Nagar, were rescued.
The police team with the help of villagers pulled the dead bodies out of the pool.
According to the police, Abhishek Sharma along with four other friends had reached Mini Pachmarhi from Bhopal for a picnic in the morning. Vijay, a resident of Ashoka Garden Bhopal, reached the bottom of the waterfall falling from a height of about 100 feet. He apparently lost balance and his foot slipped while he was taking bath.
Seeing him going into the deep water, the other four youths got down in the water. Three of the youths drowned after going into deep water. Somehow Abhishek Singh came out and shouted for help. Some villagers nearby reached for help and also saved Abhishek Sharma. The local people also informed the police.

Two of the teens who drowned in the 100 feet deep pool of the famous picnic spot called Mini Pachmarhi near Halali Dam of Vidisha were the only sons of their respective families, while this well of death took life of a youth in front of the younger brother. The lives of two of the five youths were saved. Saddened by the death of the only son, the father of a youth has even made allegations of murder. The three families did not even know that the youths had gone to Vidisha.
The father of the deceased Amit, who reached the spot from Bhopal, has expressed apprehension of the son's murder. He said that Amit had nothing to do with anyone. No one knows when he left the house. He didn't even take the car. We suspect that he was murdered as part of a conspiracy. He used to top in studies. He was pushed into the waterfall. The Vidisha police handed over the bodies to the relatives after the post-mortem.

Amit was the topper in studies: Pritam Singh, a resident of Ashoka Garden, told that 17-year-old Amit had passed class 12 this year. He was a topper. He was the only son among three daughters. He was the youngest in the house. Pritam has a tea stall in Ashoka Garden. He slept in the same shop. A room was taken on rent for the children's education. Amit was also studying with his sisters.
On getting a call from Vidisha police in the morning, he came to know about Amit being there. He didn't tell anyone about going there. Somebody must have taken him there with the intention to commit murder, said Amit’s father.

Mohit was also the only son: Mohit Sharma's father, who lives in Ashoka Garden, does a private job. The relatives told that he had left the house at around 5 in the morning without informing anyone. He has an older sister. He passed 12th this year. Nobody knows how he got here. The family suspects that they may have drowned while trying to save each other during the accident.

Youth drowned in front of brother: Abhishek Sharma, 17, a resident of Ashoka Garden, told the police that he had left the house with brother and friends at around 5 am. After reaching here, one of them fell into the waterfall after his feet slipped due to losing balance. In an attempt to save each other, one after the other they started falling down into the pool. Abhishek’s 19-year-old elder brother Abhay Sharma also drowned in the water along with friends in front of him. He and his friend Abhishek Singh, who live in Bhim Nagar, somehow escaped and came out.