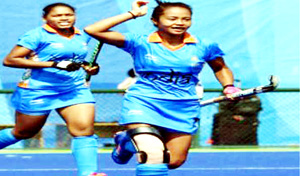 Agencies, New Delhi Hockey India (HI) on Tuesday named 33 players for the 21-day national camp starting at the Sports Authority of India (SAI) campus in Bengaluru from tomorrow. The camp is crucial for the women’s team as they will participate in the crucial Commonwealth Games in Gold Coast in April beside the exposure tour to Spain in June ahead of the women’s World Cup starting in London in July and the 18th Asian Games, Jakarta. Speaking on the upcoming training camp, chief coach Harender Singh said, “It is an extremely important year for us. While it was a satisfying 2017, ending the year with a career high world ranking of No.10 the team has that self-belief of achieving bigger goals,” coach Singh said in a statement. “The girls know they are capable of doing well against higher ranked teams and getting good results against these teams will be one of our top priorities going into a new season. It is important to play these major tournaments in 2018 with the fittest team,” he added. The midfielders in the team include Udita, M Lily Chanu, Nilanjali Rai while the forwards in the core group are Rani, Vandana Katariya, Preeti Dubey, Reena Khokhar, Anupa Barla, Sonika, Lalremsiami, Poonam Rani, Navneet Kaur and Navpreet Kaur, Namita Toppo, Nikki Pradhan, Deepika, Karishma Yadav, Renuka Yadav, Navjot Kaur, Monika, Lilima Minz, Neha Goyal. The goalkeepers include Savita, Rajani Etimarpu and Swati, defenders Deep Grace Ekka, P Sushila Chanu, Sunita Lakra, Gurjit Kaur, Hnialum Lal Ruat Feli, Navdeep Kaur, Rashmita Minz, Neelu Dadiya.