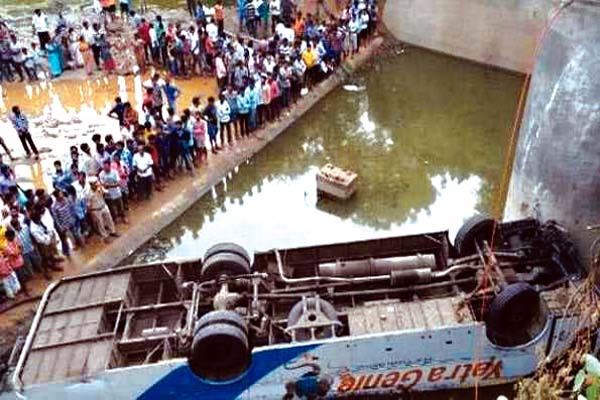 Agencies, Baharampur At least 36 people met a gruesome death and several were injured when a bus packed with over 60 passengers plunged into a canal after crashing through the railing of a bridge at Daulatabad in Murshidabad district this morning. Among the dead were several women and three children, police said. The North Bengal State Transport Corporation bus, plying en route to Malda from Karimpur in Nadia district, had been pulled out of the canal with the help of two cranes, police said. Chief Minister Mamata Banerjee rushed to the accident site, about 220 km from Kolkata, in a helicopter, cutting short all other programmes. Transport Minister Suvendu Adhikari too had reached was at the site. Miss Banerjee, who was overseeing the rescue operations and visited the injured in the Murshidabad Medical Colleged and Hospital, has announced a compensation of Rs five lakhs to each of the victim’s families, Rs one lakh to those seriously injured and Rs 50,000 to the other injured passengers. According to Hospital sources, at least 36 bodies have been sent for post-mortem. Police said the toll might rise as many bodies were still trapped in the bus. Transport Minister Suvendu Adhikari along with other officials rushed to the spot by helicopter to supervise the rescue operation. Reports quoting the survivors said the driver of the bus was speaking on his mobile when the accident took place. However, the exact reason of the accident is yet to ascertained.Local people, who rushed to the site for rescue operation, turned violent as they alleged that the bridge had been in a dilapidated condition since long. Police were targeted by an angry crowd, who pelted with stones, and accused of arriving late forcing the former to resort to lathicharge and lobbing of teargas shells to bring the situation under control. Police had to fight a pitched battle with the irate mob, who also torched some police vehicles. Divers and NDRF personnel were also pressed into service to rescue the trapped passengers.Locals have also deployed country boats for the rescue operation.Some managed to swim ashore and informed that the accident occurred as the driver while talking over his cell was trying to overtake a truck.