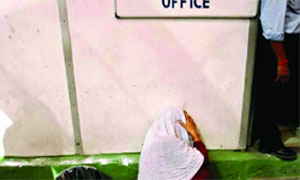 On August 5-2019 by a Presidential order the Section 370 and 35(A) have been scrapped from the Constitution of India. The Union Law Ministry has published the order as notification in Gazette of India and with this it came into effect with immediate effect.  The Union Home Minister Mr Amit Shah moved a resolution in the Rajya Sabha. The state of Jammu and Kashmir has been bifurcated as Jammu and Kashmir and other part Ladakh as separate state and both are Union Territory. The Jammu and Kashmir will have a legislature and there will be no Vidhan Sabha in Ladakh. It will be handled by the Central Government and Parliament. With this the duel citizenship has also come to an end. The situation in Kashmir Valley is infested by terrorism and as Union Territory the Central Government will deal with direct control.  In the Rajya Sabha the Bahujan Samaj Party, Socialist Party, Biju Janata Dal, YSR Congress of Andhra, AIADMK, Shiv Sena supported the move. Congress, Trinamool of Mamata Banerjee and Janata Dal United of Nitish Kumar opposed the move. The state of Jammu Kashmir being a Union Territory will have Lieutenant Governor. The situation is Kashmir Valley of terrorism has to be tackled effectively by the Central Government. Under the amended acts now the stone pelters are also terrorist and armed forces will deal with them even if they have to resort to firing on them. At the time of partition of India in 1947 on hindu-muslim communal lines the Kashmir was a princely state. With the lapse of British Paramountcy the Princely states were asked to decide its own fate by merging with India or Pakistan or option of remaining independent. The Ruler of Kashmiri Maharaja Hari Singh decided to remain independent. But when Pakistan invaded it to snatch its muslim area, the Ruler merged the state in India. The India immediately swing in to action to repulse Pakistan Army. But due to UN ceasefire the some parts of the Valley remained in Pak control and India. The division in the root cause of the Kashmir problem. The Modi Government has declared that any negotiation on it will be on the Pak occupied area. Now the Modi Government have to take step to recover the areas occupied by the Pakistan.  On state merger into India under the agreement between the Maharaja Hari Singh and Indian Prime Minister Pandit Nehru the Section 370 giving special status to Kashmir was included in the Constitution, that the Modi Government revoked on August five 2019. On May 14 in 1954 President Dr Rajendra Prasad by a Presidential Order included section 35 (A) as a part of section 370 and it is also scrapped today.