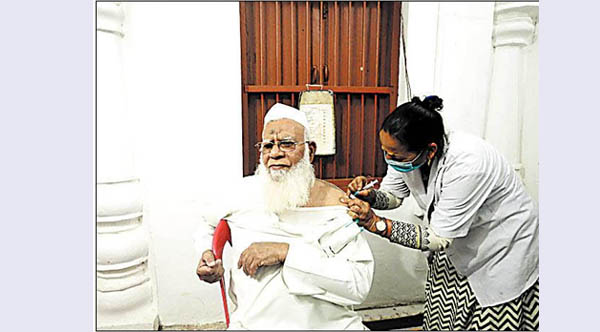 Chronicle Reporter, Bhopal
Corona is becoming dangerous in Madhya Pradesh. In the last 24 hours, 3,722 new cases have been received and 18 people lost their lives. The positivity rate has reached 11.11%. In 41 out of 52 districts of the state, more than 20 have been found infected. The active case figure has crossed 24 thousand.
The conditions are worsening in Bhopal, Indore, Jabalpur and Gwalior. In the last 24 hours, 805 positive cases have been found in Indore, 582 in Bhopal, 257 in Jabalpur and 160 in Gwalior. Apart from the four metros, there are 37 such districts where now more than 20 cases have started being received every day. There have been 90 cases in Narsinghpur, 95 in Ratlam, 79 in Khargone, 74 in Ujjain and 63 in Umaria.

Positivity rate above 10 per cent
Sources in the health department say that the infection rate (positivity rate) should not be more than 5%, but it has crossed 10% in the last 7 days in the state. The positivity rate fell to 1% in January. In the month of February it ranged between 3 and 4%, but in March it increased its speed and in April it increased to more than 10% and the cases increased up to 5 times.
The infection has spread rapidly after Holi, whereas the day before that i.e. on March 28, there was a Sunday lockdown. Since then, the speed of Corona is becoming unbridled. In the last 7 days, 20,792 infected have been found in the state, while active cases increased by 7,059 during this period. However, more than 60% of the patients are currently under home Isolation.
Within the last 7 days 96 patients have died due to Covid in the state. These include 18 deaths on Monday. Thus the total number of dead has reached 4,073. The total number of corona virus cases in the state has increased to 3.13 lakh.
Tally of active cases has breached 22,000 mark which is a matter of concern for the State Health Department. Positivity rate is above 11 per cent and active case load of 22,654 patients is enough to overwhelm health facilities in the State. If figures are any indicator then the State Health Department has to make preparations on war footing in view of rise in corona cases. Health experts have opined to take precautionary measures as this sudden increase in number of coronavirus cases can prove fatal owing to several mutations the virus has undergone.
Indore and Bhopal districts witnessed a single day spike of 788 and of 582 cases respectively. Number of people who have recovered from the disease has reached 2,83,540 pushing the State’s recovery rate to 94.38 per cent, while Covid-19 fatality rate stands at 1.38 per cent. Madhya Pradesh’s coronavirus figures are as follows: Total cases 3,10,249, active cases 22,654, new cases 3,398, total deaths 4,055, discharged 2,83,540, number of people tested so far 65,28,559.