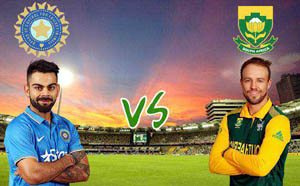 Capetown, After scripting history by winning any maiden series in the South African soil, the men in blue-led by Virat Kohli will be eyeing to end their eight week long tour with a win on Satuirday, when they face the Proteas in the third and final T20I at Newlands Cricket Ground here on Saturday. After a thumping 5-1 victory in the ODI series, Team India continued with their winning momentum in the T20I series as they won the first match by 28 runs and took a 1-0 lead. However, the hosts made a comeback in the second match and won the affair by six wickets to keep the series alive. Riding on opener Shikhar Dhawan's 72-run knock, which helped them post a mammoth 203 run, followed by pacer Bhuvaneshwar Kumar's fifer, the visitors restricted the Proteas at 175 runs to set a 28-run victory in the first T20I. In the second issue, Manish Pandey's and MS Dhoni's unbeaten 79 and 52 run innings helped India post a respectable 188 in the allotted 20 overs however, South Africa wicketkeeper Heinrich Klassen and skipper JP Duminy's fantastic half-centuries guided the hosts home with eight balls to spare.