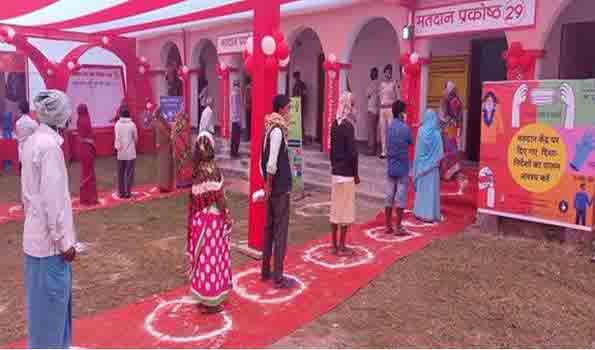 Patna, Nov 03 (UNI) Polling percentage increased to 44.51 per cent till 3 pm in the second phase of Bihar Assembly Elections in 94 constituencies while polling came to an end in eight of these constituencies at 4:00 p.m. due to to security reasons.Sources at the office of Chief Electoral Officer said here that 44.51 per cent voters exercised their franchise still 3:00 pm in second page of Bihar Assembly Elections. Polling in 8 of the 94 constituencies came to an end at 4:00 pm due to to security reasons.

Constituencies where polling came to an end at 4:00 PM are Beldaur and Alauli in Khagaria district, Kusheshwarasthan, and Gora Bauram in Darbhanga district, Minapur and Sahebganj in Muzaffarpur district and Raghopur in Vaishali district.Election Commission had fixed polling hours in these constituencies from 7 AM to 4 PM due to security reasons.

In the remaining 88 constituencies, polling would be held till 6 PM