5 arrested for stealing bag from car 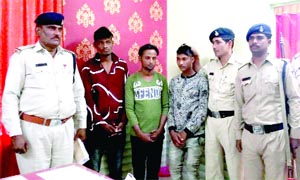 Chronicle Reporter, Bhopal Police have arrested five persons who had broken the windowpane of a car near New Sabji Mandi under Bairagarh police station on April 15 and stolen a bag that contained Rs 52000 cash and some important documents. Bairagarh TI Sudhir Arjaria informed that unidentified thieves had stolen a bag by breaking the windowpane of the car. The CCTV footage of the incident revealed that before the incident a hearse was deliberately parked in front of the car. The police quizzed the hearse driver Deep Singh Thakur and he admitted that he had committed the crime along with his helper Vijay Manjhi and three other accomplices Amit Rajput, Jitu Rajput and Shahrukh alias Akku. The accused had divided the money among them and hidden the empty bag near a pond. Police have recovered stolen Rs 42000 from the suspects. Police have revealed that the accused have no crime record. Investigations are on.

Crime branch police nabbed seven bookies accepting bets on the ongoing IPL T20 matches from Govind Garden area on Tuesday and recovered betting slips having transactions of worth lakhs of rupees, 38 mobile phones, two LED TVs, one set top box, and call recorder from their possession. Acting on a tip off seven bookies were nabbed accepting bets on IPL matches. The suspects were operating betting from a rented room in Govind Garden area. The accused are from different regions and would team up during the IPL T20 matches for betting. They are from Jhansi, Datia, Banda and Bhopal. ASP (Crime) Rashmi Mishra said that one of the accused Hemant Agrawal was tenant of the house where the racket was operated. The other accused who are from Datia and other areas were in search of new place and found the rented house of Hemant suitable for betting. The suspects were identified as Hemant Tiwari (25) of Jhansi and runs business of packed snacks, Pramod Kumar (28) of Banda U.P. and is a farmer, Latif Khan (28) of Datia and works as accountant at Galla Mandi, Rohit Sitole (19) of Jehangirbad Bhopal and is a student, Vikas Yadav (22) of Datia and is farmer, Harish Yadav (23) of Datia and is a farmer, Akash Yadav (24) of Datia and is a farmer. The accused confessed that they work during the day and after working hours they would involve in betting in their areas and have built a big network of gamblers who bet on these matches.