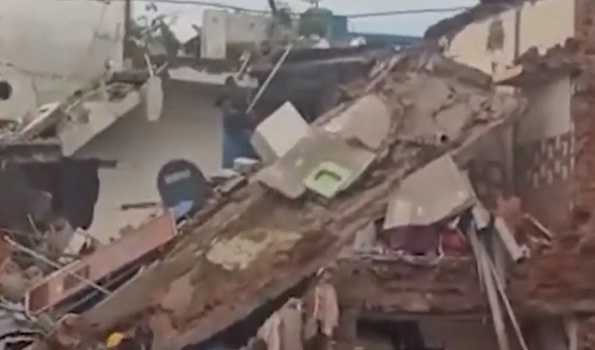 Chennai, Nov 23 (UNI) Five people, including two aged woman were killed and 12 others sustained burns and injuries in a LPG
cooking cylinder blast at Karungalpatti village in Salem district  of Tamil Nadu on Tuesday.
The impact of the explosion, which took place at the residence of a Fire Station Officer, was such that three adjacent houses in the
narrow street were razed to the ground.
Reports received at the police headquarters here said the deceasedwere identified as Rajeswari (80), house owner Padmanabhan, who is a Fire Officer, his wife Devi, Karthik Ram (18) and Ellammal.
Rajeswari lit the gas stove at around 0645 hrs for preparing tea when the blast occurred with a deafening sound following a gas leak.
Rajeswari, who sustained extensive burns, died on the spot. Police and fire service personnel rushed to the spot and rescued 12 people, including a ten-year-old girl, who were trapped under the rubble and shifted them to Government Mohan Kumaramangalam
Medical College hospital for treatment where the condition of three of them were said to be serious.
After a nearly eight hour long rescue operations carried out by the police and fire service personnel, revenue officials and a team
from the National Disaster Response Force (NDRF), the bodies of Padmanabhan, Devi, Karthik Ram and Ellammal were recovered
from the debris.
Salem District Collector S.Karmegham, Corporation Commissioner T. Christuraj and ruling DMK MLA R. Rajendran visited the spot and
monitored the rescue and relief works.