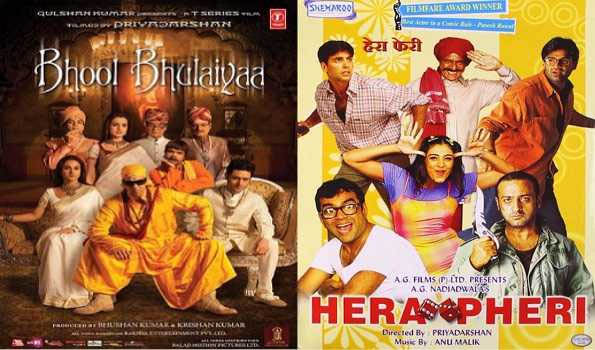 New Delhi, Nov 19 (UNI) Comedy is a genre that brings together families like no other. Be it Baby Boomers, Millennials or Gen Z, every member of a family from across different generations knows that a joyous time awaits them when a comedy movie night is planned.

Bollywood has produced evergreen hits when it comes to comedy that audiences love to watch on repeat. If you’re looking for tears of laughter and are geared up to be rolling on the floor by watching hilarious antics of legendary characters, here are five legacy franchises in the comedy genre we recommend watching across Sony MAX2, Prime Video, Zee5, Jio Cinema and Netflix:

The infamous jodi of Munna Bhai and Circuit is packed with bromance and drama in Munna Bhai M.B.B.S. This heart touching film is thronged with action, absurd comedy, innocent romance and heart-touching moments. The movie follows Gangster Munnabhai who presents himself as a social worker. He makes a promise to his father that he will become a doctor and make him proud, following which he enrols himself in a medical college and what follows is a laughter riot! Watch ‘Munna Bhai M.B.B.S’ on Sony MAX2, today at 8 PM.

‘Hera Pheri’ is a comedy gem that has been passed down generations and is still loved. The plot is simple: Shyam (Sunil Shetty), Raju (Akshay Kumar), and Babu Rao (Paresh Rawal), the three main characters, are all in desperate need of money. Raju believes that all of their issues would be solved when "dangerous" thug Kabira (Gulshan Grover) accidentally dials Babu Rao's number to kidnap the granddaughter of a local wealthy man. In an era where Bollywood comedy-of-errors were not that common, Hera Pheri turned out to become a cult classic. You can stream ‘Hera Pheri’ on Prime Video.

‘Golmaal’ is a laughter riot that keeps getting better from the start to the very end. Ajay Devgan, Tushar Kapoor, Arshad Warsi, and Sharman Joshi essay the role of four college mates who seize every opportunity to rob people in order to live opulently in the dorm and pay back a sizable loan they had taken. Trouble arrives at their doorstep when they plan to rob the house of an elderly blind couple. The quintessential personas of each character is admired by fans across the country. Audiences can stream ‘Golmaal: Fun Unlimited’ on Zee5.

‘Welcome’ is a light-hearted, rib-tickling entertainer. With a cast known for their bubbly and comic timing like Akshay Kumar, Nana Patekar, Anil Kapoor and Paresh Rawal, the film proves to be an absolute guilty pleasure for all. This movie combines some mischievous humour with excellent situational comedy. The film is based upon a man who falls in love with a beautiful woman, but later discovers that her brothers are notorious gangsters. Viewers can watch ‘Welcome’ on Jio Cinema and on Netflix.

‘Bhool Bhulaiyaa’ is based on an NRI, Siddharth (Shiny Ahuja) and Avni (Vidya Balan) who return to their homeland in India after a period of time. There, they run into some peculiar customs that the locals adhere to. Shiny pulls in his friend and psychiatrist Aditya (Akshay Kumar) who deals with such paranormal events, in an effort to discover the true cause of the ongoing activities. Bhool Bhulaiyaa is amongst Bollywood's top rated comedies with its enthralling storyline and witty punchlines. ‘Bhool Bhulaiyaa’ is available to stream on Netflix.