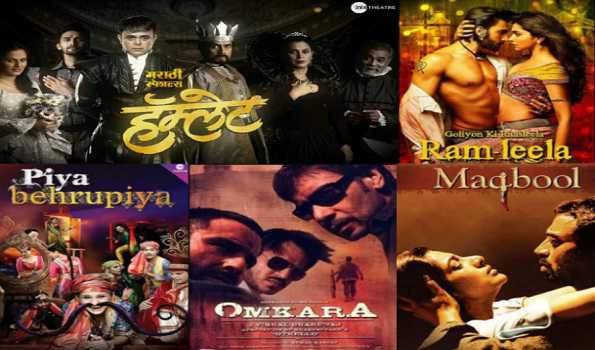 New Delhi, (UNI) Playwright, poet and occasional actor William Shakespeare is the most recognisable and influential name in English literature, and his work has not only been widely translated into almost every major language, but also performed more extensively than that of any other playwright.

As an astute observer of human nature and a master of language, Shakespeare created both comedies mocking human foibles and imposing tragedies that depicted fatal flaws that destroy not just lives but the core of humanity.

This is why his plays, though interpreted in different epochs on stage, television and cinema, continue to ring true.

Here are a few of our favorite Shakespearean tales that have done complete justice to the bard's genius.

We watch in amusement as Viola falls in love with Duke Orsino, who has already fallen for Lady Olivia, who in turn cares for Cesario, who by the way is Voila in disguise! With an outstanding performance by Geetanjali Kulkarni as (Viola/Cesario), the play has been performed in many prestigious venues including Shakespeare's Globe in London. The play also stars Amitosh Nagpal (Sebastian), Mansi Multani (Lady Olivia), Sagar Deshmukh, Mantra Mugdh, Gagan Riar, and Neha Saraf.

As one of the most poignant tragedies of Shakespeare, 'Hamlet', has been widely adopted and be it Lawrence Olivier, Kenneth Branagh, David Tennant, Ethan Hawke or our own Shahid Kapur in 'Haider,' every actor worth his salt craves to play the Prince of Denmark at some point in his career.

Perhaps that is why even Marathi Theatre has been drawn to this tragedy of indecision. Zee Theatre's teleplay 'Hamlet' has been directed by Chandrakant Kulkarni with Sumeet Raghavan powerfully essaying the titular role. The unusual aspect of the play is that its geographical location and historical context have not been changed though the characters speak in Marathi. The play also stars Tushar Dalvi, Sunil Tawde, and Mugdha Godbole.

With 'Maqbool', 'Omkara' and 'Haider', director Vishal Bhardwaj has delved deep into three major Shakespearean tragedies; 'Macbeth', 'Othello' and 'Hamlet.' The trilogy however began with 'Maqbool' which is now considered as a cult classic due to its powerful ensemble cast, seamless contextualization of the story in the Mumbai underworld and unforgettable performances by Irrfan Khan, Tabu, Pankaj Kapur, Om Puri, Naseeruddin Shah and Piyush Mishra.

Vishal Bhardwaj's second film in his Shakespearean trilogy roots ‘Othello’ in UP's hinterlands where Ajay Devgn plays Omkara, the henchman of a corrupt politician. He falls in love with Dolly (Kareena Kapoor), a higher-caste, beautiful girl who he feels unworthy of. This lack of self-worth leads him down a dark path of toxic jealousy and suspicion and after getting manipulated by the wily Langda Tyagi (Saif Ali Khan in a career defining role), he commits an unforgivable crime.

Sanjay Leela Bhansali brings his signature flamboyance and visual extravagance to this interpretation of Shakespeare’s tragic love story, 'Romeo and Juliet'. Ranveer Singh and Deepika Padukone play the star-crossed lovers in a violent setting in rural Gujarat where two warring tribes, Rajadi and Sanera, have been at loggerheads for the past 500 years.

Like the Montagues and the Capulets, they are willing to draw blood at the slightest provocation and much like Romeo and Juliet, Ram and Leela also find themselves caught tragically in this maelstrom of hate. With stunning set pieces, elaborately choreographed song and dance sequences and a show stopping performance by Supriya Pathak, this film went on to score big at the box office.