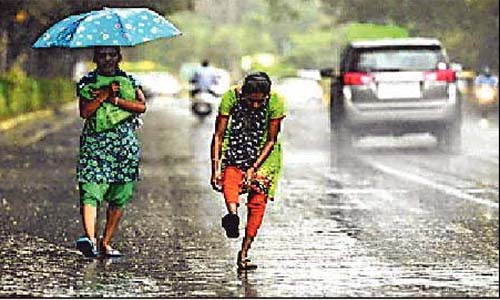 Heavy rain alert in 34 in districts- Rains heavily in 10 divisions
Chronicle Reporter, Bhopal
In Madhya Pradesh, the rain that has continued for the last two days has gained momentum. During the last 24 hours, 50 out of 52 districts have received rain. At the same time, the Meteorological Department has once again issued an alert of heavy rain in the state.
The department has warned of heavy rain in 34 districts, while there is a possibility of heavy rain in 10 divisions including Bhopal, Indore and Ujjain. Heavy rain started on Wednesday afternoon across the state including Bhopal. During the last 24 hours, the maximum rainfall was in Harda, here it rained more than 4 inches. Seoni and Hoshangabad also received 3-3 inches of rain and 1 inch of rainfall in Bhopal and Indore. For the first time, rain has fallen in 50 out of 52 districts. During the last 24 hours, most areas of the state have received light to heavy showers.