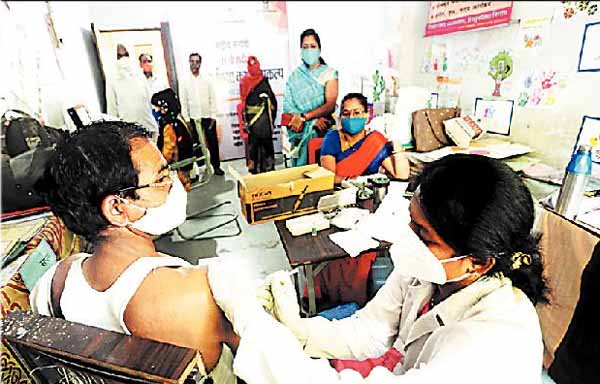 Chronicle Reporter, Bhopal
The second wave of corona is becoming dangerous in Madhya Pradesh. In the last 24 hours, 3,400 new cases have been found in the state. During this time 15 people also died. The number of active cases in the state has crossed 22 thousand. These figures are when there is a Sunday lockdown in 12 cities of the state. There was a lockdown in Indore, Bhopal and Jabalpur on the last three Sundays, but there was no significant impact on the pace of infection.
Meanwhile, Chief Minister Shivraj Singh Chouhan said he does not want a long lockdown. This creates a crisis of livelihood. The number of beds in hospitals has been increased by 10%. It is being increased further. Vaccination is being done at a fast pace. At the moment, the mask and physical distance are the only ways to avoid Corona. There was no decrease in the infection rate in the state on Sunday also. Looking at the data for the last one week (29 to 4 April), during this period, 18,727 people tested positive and active cases increased by 7,504, whereas between 22 and 28 March 12,956 were found infected in the state. During this time, 5,593 active cases were also increased.

Record cases in Bhopal-Indore
The Corona infection is spreading rapidly in Bhopal and Indore. In the last 24 hours, there have been 549 cases in Bhopal, while Indore has seen the maximum record of 788 new cases. There are 236 new in Jabalpur and 146 in Gwalior. The number of cities with over 20 has increased to 36.
Despite being strict in lockdown in Bhopal, people are not looking serious about it now. This is the reason that in the lockdown of 3 Sundays from March 20 to April 4, the police apprehended more than 4 thousand people for breaking the rules of lockdown. With this, the police have so far recovered a fine of Rs 4.25 lakh.
On April 4, police caught 600 people, most of them for violating the lockdown. This was the highest ever action in a single day. In view of this, the administration is now in a mood to act tougher. The special thing is that on April 4, the maximum action was taken in the new city. Here cases were made in 22 police station areas regarding lockdown violation, while in old Bhopal only 10 cases were made in 7 police station areas.

300 fined for not wearing masks
The police conducted special checking and patrolling throughout the city. Blockade / barricading was carried out at more than 200 places by more than 3000 officers / employees in Bhopal district. During this period, Section 188 action has been taken against about 280 people who were unnecessarily roaming without masks or violating Section 144 by opening shops. The challan of around 300 people who did not wear masks was done.
In Bhopal, it has become mandatory to wear masks in public places. In such a situation, on Sunday, a total of 300 people were caught without a mask, but on April 4 this number doubled. Police apprehended more than 300 people walking without masks. So far, police has taken lockdown action against more than 4 thousand people. A penalty of four and a quarter lakh rupees was also taken from them.