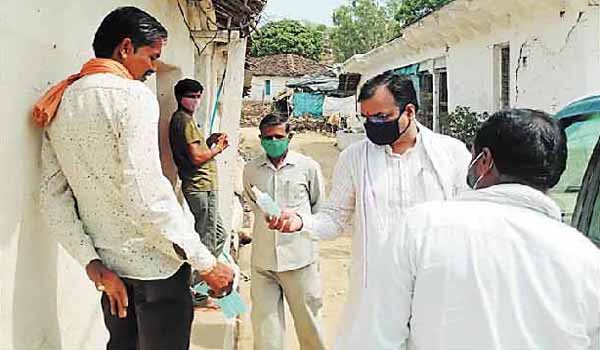 Chronicle Reporter, Bhopal
The speed of corona has decreased in Madhya Pradesh. The government claims that this is the effect of the curfew. In 24 hours, 5,921 new cases were reported in the state. This is the lowest in 46 days. Active cases in the state have come down to 88 thousand 983. Out of this, 29 thousand 948 were found in villages, which is 34% of the total active cases. The positivity rate has come down to 9%. Meanwhile, black fungus is coming as a big threat in the state. So far 281 patients of black fungus have been found and 27 have died.
According to the latest report of the Health Department, 7,069 patients have died of Corona so far. This includes 77 deaths on Sunday. Eight patients died in Indore, Bhopal and Gwalior and 5 in Jabalpur.

657 new cases in Bhopal, lowest in 40 days
Indore saw the highest number of 1,307 new corona cases on Monday. 657 new patients were found in Bhopal. This is the lowest in 40 days. 421 new ones were found in Jabalpur and 201 in Gwalior, while less than 50 new corona infections were identified in 15 districts. In the last 24 hours, corona examination of 64 thousand 741 samples was done in the state. At the same time, number of active patients is also decreasing.

Positivity reduced to 9%
The positivity rate in the state has now come down to 9%. The second positive wave rate in the second wave of Corona reached 25% on April 18, but it has been steadily decreasing since then. The recovery rate has increased to 87% on 16 May.

Black fungus: 2000 amphotericin injections to be airlifted from Gujarat
Meanwhile, the government is taking action in view of rising threat of black fungus/. Chief Minister Chouhan said that the government is making free arrangements for treatment of black fungal disease after Covid. For its treatment in the state, 2 thousand amphotericin injections are being airlifted from Gujarat.
Chouhan said that in the Covid vaccination work being done in the state, it should be ensured that not a single dose of vaccine is wasted. Waiting and on the spot registration and vaccination should also be arranged.
The review found that I.C.U. beds have been made available for covid treatment in all districts. At the same time there is sufficient supply of oxygen and adequate availability of oxygen beds. 76 percent of the people in the state are in home isolation.

Separate wards to be made for black fungus and children
Separate wards would be made in all medical colleges for black fungus and children. The Chief Minister has said if there is any problem in future, then separate wards and facilities should be ensured to deal with it. He said that along with the medical college, this arrangement should be made in all the districts, for this the district collectors should work out the planning of their districts.