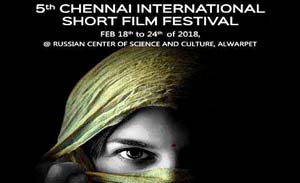 Chennai, The 5th Chennai International Film Festival (CISFF) would be held here from February 18 to 24.The fest would screen short films belonging to various genres and languages from across the world. A total of 371 Short films from 47 countries were submitted online for this edition of the festival. These short films could be seen exclusively in theatres only and could not be found on YouTube or digital freeware video viewing platforms. An expert jury formed by the Academy has whittled down the final entries to 127 films from 19 countries that were going to be screened at the premiere event. This year's foreign film selection would have contributions from India, Germany, Austria, Russia, Spain, US, UK, China, Poland, Switzerland, Sweden, Brazil, Belgium, France, New Zealand, Italy, Mexico, Netherlands and Turkey. To break the language barrier, movies in International Languages have been subtitled in English for better understanding by the viewers. A jury comprising of Directors Pushkar and Gayatri, Lokesh Kanagaraj and Maddone Ashwin would be judging the films. The Short films were divided into three categories--Animation, Documentary and Fiction--with awards across all categories. A total cash prize of Rs 2,40,000 would be awarded to the winners and the runners. A Movie Buff award instituted from this year, would be the new feature of this edition.In all, ten awards would be presented this year, a CIFF release said on Saturday. Director K Mohan Raja, Foreign dignitaries and Bureaucrats would be the guests for the inauguration to be held on February 18 at the Russian Cultural Centre. On all days, except the first and the last day, there would be an interactive session in the evenings with a celebrity guest, with the focus being on various aspects of film-making. This would be an attractive proposition for any budding film-maker as it would provide an opportunity to learn the trade from some of the best in the business.The festival would be organised by the Chennai Academy of Motion Picture headed by its President S Kannan, Vice-President Santhanam.Mr Vignesh Chinnadurai would be the Festival Director.