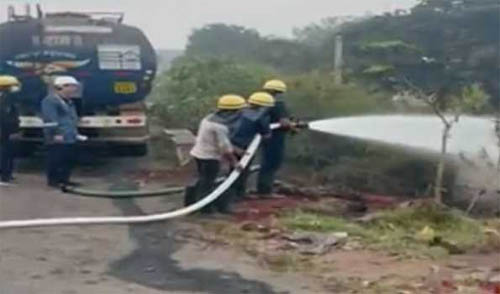 Surat, Jan 6 (UNI) Six workers of a Surat factory were killed and 19 others taken ill after they inhaled toxic gas suspected to have been spilled from a chemical tanker in the Gujarat city on Thursday, police said.

Inspector K P Jadeja of Sachin police station told UNI the incident took place around 4 am near a mill that produces prints for fabrics.

When the police reached the Vishwa Prem Dyeing and Printing Mill located in Sachin GIDC around 4.15 am, they found 25 workers sick after inhaling the gas.

All of them were working on the ground floor of the factory. They were quickly rushed to the Civil Hospital where six of them, including a woman, later died.

The others are undergoing treatment.

The tanker containing chemical was found a short distance from the factory, Jadeja said, adding that police suspects poisonous gas was released while attempt was made to flush the used chemical into a drain.

Experts from the Forensic Science Laboratory (FSL) are investigating the matter along with the police.

Six workers of a Surat factory were killed