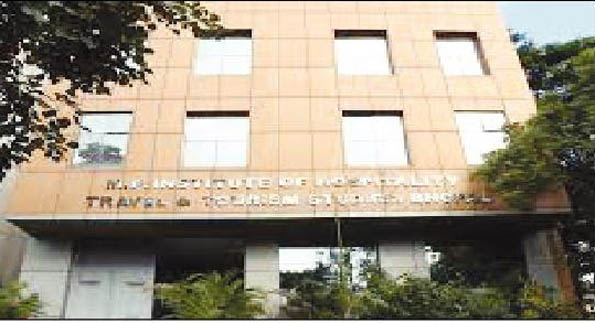 (Sandeep Tiwari)
Chronicle Reporter, Bhopal
State Chief Shivraj Singh Chouhan is making every effort to promote tourism in the state. But due to the carelessness of the officers of the tourism department, the condition of the Institute of Tourism, Hospitality and Hotel Management, which operates in the capital itself, has worsened.
The condition is that not a single student took admission here in 2022-23, while 6 to 7 lakh rupees are being spent every month i.e. about 60 lakh rupees per year in operating the institute. The special thing is that the unskilled person becomes director of the institute, due to which the old students are also suffering.
Institute started 10 years ago
In the year 2012, a posh institute was constructed by MPT at Bhadbhada Road at a cost of Rs 1.28 crore. From the year 2018, UG (Under Graduate) courses were started in this institute. Under BBA, tourism, hospitality and hotel management was started in this. In the first year i.e. in the year 2018-19, a total of 9 students took admission against 60 seats. In the year 2019-20, 53 out of 120 seats, 45 out of 160 in the year 2020-21, 36 out of 120 students took admission in 2021-22. Out of this, the students who took admission last year had to leave the institute due to non-receipt of syllabus, whereas 2022-23, became zero admission year.
There is no regular faculty...
It is to be noted that there is not a single regular faculty in the Institute of Tourism, Hospitality and Hotel Management operated in the capital Bhopal, even retired professor Neelam Gupta has been made the director. Those who have no experience in the tourism sector, the students here also openly opposed it. But no action was taken on the matter. It is being told that Gupta is getting the support of some senior officer, due to which his tenure has also been extended. Experts say that the main reason for having zero admission year, is that there is no skilled faculty in the institute. While the officials of the institute say that due to the implementation of the new education policy in the institute, they did not get the syllabus and had to declare zero year.
This is how expenses are being incurred in institute
- Director's salary is around 1 lakh
-  Salary of Rs 2 lakh for support staff
- Salary of visiting faculty is around 70 thousand
- 35,000 for the cost of the director's car
- Rs 1 lakh maintenance and other expenses
On the other hand, officials say that the Government's MPT Institute will now be promoted in government higher secondary schools running in all 52 districts of the state. For this, with the help of the officers of the MPT run by the institute, they are writing a letter to the Directorate of Public Instruction. A target has been set to fill all 120 seats in this session.