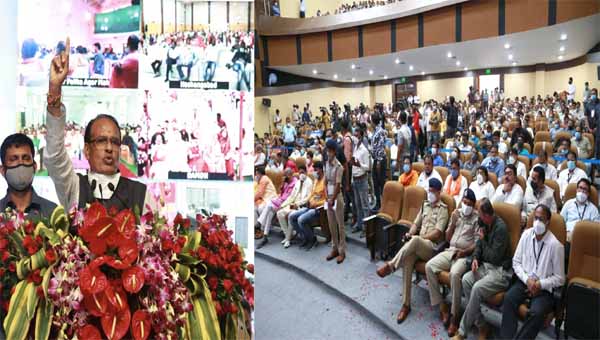 Chronicle Reporter, Bhopal
Chief Minister Shri Shivraj Singh Chouhan said that development will be meaningful only when the poor have full participation in it. In this inclusive development, the urban poor should get full benefits. It is the effort of the Madhya Pradesh government that the urban poor, who are left behind in the path of development, should get basic facilities of bread, clothes and houses. Free food grains were distributed during the Anna Utsav and today one lakh 29 thousand 292 urban beneficiaries are going to get the facility of a pucca roof house. Some of them are getting home entry, some of them land worship and some are getting the installment of the scheme in their account. Chief Minister Shri Chouhan said that our target is that by the year 2024, all the poor should get their house with a pucca roof.
Chief Minister Shri Chouhan was addressing the program of gifting of new houses to the beneficiaries of the state level Pradhan Mantri Awas Yojana (Urban), Bhumi-Poojan of newly approved houses and installment payment for construction of houses at Khandwa today. Forest Minister Dr. Vijay Shah, Culture and Khandwa district in-charge Minister Usha Thakur along with public representatives and officials were present.
In the program, one lakh 29 thousand 292 beneficiaries of the state were benefitted under Pradhan Mantri Awas Yojana (Urban). In this, the assistance amount of 627 crores was transferred to 79 thousand 39 beneficiaries in their accounts. Bhoomi-pujan was also done for the construction of houses for 50 thousand 253 beneficiaries of the scheme.

44000 crores will be invested in development of cities
Chief Minister Shri Chouhan addressed the urban beneficiaries of entire Madhya Pradesh from Khandwa. He said that the target is to provide a pucca roof over the heads of all poor families in the state by the year 2024. Those who do not have land, they will be given a lease and made the owner. Health security will be provided to all the poor by giving them Ayushman Yojana cards. Chief Minister Shri Chouhan said that all basic facilities would be ensured in the cities of the state.

Auditorium to be named after Kishore Da
Chouhan also inaugurated a newly constructed cultural auditorium at Khandwa at a cost of Rs 19 crore 43 lakh today. On the request of Forest Minister Shri Vijay Shah, he named this grand auditorium as Amar Singer Late. Also announced to do it in the name of Kishore Kumar. Chief Minister Shri Chouhan said that many songs sung by Kishore Kumar give inspiration in life. He also sang the mouthpiece of his sung song "Ruk Jaana Nahi Tu Kahin Haar Ke" and said that this song kept his morale up during the days of Corona's struggle. Forest Minister Shri Vijay Shah said that in Khandwa, a national level self. Shri Kishore Kumar Memorial Award has been instituted. He named the newly constructed cultural building in Khandwa as Late. Urged the Chief Minister to do it in the name of Shri Kishore Kumar.