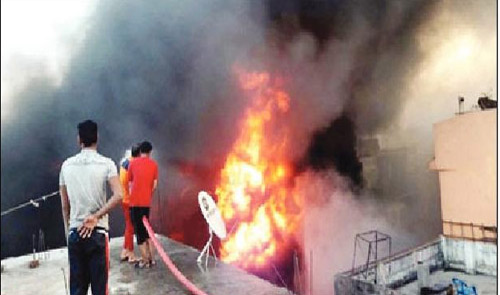 Bhopal: A massive fire broke out in a crockery godown in Bhopal’s Kabadkhana area in the early hours of Tuesday. 8 fire tenders worked for 5 hours to douse massive fire. Crockery godown in Kabadkhana was gutted.
The fire was brought under control after about four hours of effort. However, the fire continued to blaze inside the godown till noon. As of now, the reason for the fire has not been disclosed. Police suspect that the fire may have started due to a short circuit. There was chaos in the area after the incident.
Hanumanganj police station in-charge Mahendra Singh Thakur said that Deepak Tolani's has a crockery godown in the  Kabadkhana area. In which a large amount of plastic items were kept. In the early hours of Tuesday, people saw smoke rising from inside the godown.

Immediately the police informed the fire staff of the Municipal Corporation. Firefighters who reached the spot started trying to douse the fire. The fire was brought under control around 10 am. However, the plastic material kept blazing inside the godown. To extinguish it, the fire crew kept on spraying water till the afternoon. The warehouse operator is yet to assess the damage caused by the fire.