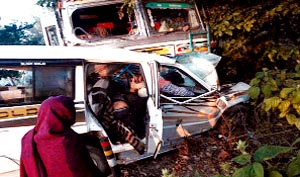 Agencies, Dumka Eight people including a woman were killed as a vehicle in which they were travelling hit with a speeding truck at Jardaha Mode on the Dumka-Deoghar main road under Taljhari Police Station area of this district today. DSP Roshan Gudiya said that the occupants of the vehicle were going to appear in the exam of Panchayat Sachiv ‘ being organised by the Jharkhand Staff Selection Commission in Deoghar. Police said there were a total of 9 occupants in the ‘Tata Sumo’ out of which seven were killed on the spot while another one died in the Sadar Hospital. Another seriously injured was later referred to Bardhman of West Bengal. Post the incident, the truck driver managed to flee from the spot leaving the vehicle behind. Police suspected that due to dense fog early in the morning the drivers of both the vehicles could not spot each other and ended up colliding with each other. Such was the magnitude of the accident that many bodies remain mangled inside the ill feted vehicle itself and police had to use JCB machines and other tools to take the bodies out. All the bodies have been sent to Sadar Hospital. The deceased have been identified as Sushmita Dutta, Sourav Dutta, Santosh Gupta, Ambika Prasad Turi (driver of the vehicle), Purushottam Manjhi, Navin Gorai, Swastik Kumar and Devendra Gupta. Meanwhile Jharkhand Chief Minister Raghubar Das has expressed grief over the incident. In his message he said that the state government was with the family of the deceased in this time of grief. Dumka DC Mukesh Kumar too expressed grief on the incident and said that the district administration was with the kin of the family members. JVM(P) MLA Pradeep Yadav and Congress MLA Badal Patralekh have also expressed grief in the incident.