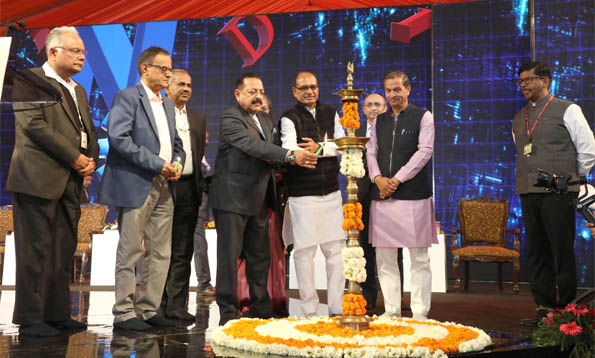 Chronicle Reporter, Bhopal
Chief Minister Shivraj Singh Chouhan has said that curiosity and persistence are the mother of science. Science is considered the mother of technology, but curiosity is also the mother of science. Curiosity only helps us to understand any formula of science or mathematics. It should be our aim that we should spend maximum energy in awakening the curiosity towards science in the public mind. If there is curiosity for a subject and there is no insistence to complete it, then that work can never be completed. There are many deadlocks in any work, but it is the persistence that keeps us determined to complete that work. Keeping this formula of curiosity and persistence in mind, Science Technology and Innovation Policy-2022 has been implemented in the state. Making scientific thinking and understanding a part of daily life, maximum use of modern technologies in government and society and three points of creating new thinking, new learning and new initiative generation are the basis of our policy. The best eco system exists for startups in the state. Chief Minister Shri Chouhan was addressing the inauguration program of the eighth India International Science Festival. Chief Minister Shri Chouhan thanked Prime Minister Shri Narendra Modi for the Science Festival in Bhopal.

India is the mother of scientific tradition
CM Chouhan said that India has a rich heritage. India is the mother of geo knowledge as well as scientific tradition. Seven thousand years ago, the idea of a plane was conceived in the Ramayana period. The parmanuvad of Maharishi Kanad, the astronomical theories of Bhaskaracharya are proofs of ancient Indian intelligence. Varanasi and Takshashila were the big centers of medicine science. The contribution of Maharishi Sushrut and Charak to medicine is incomparable. We get information about Navagraha from Aryabhata and Varahamihira. The philosophy of India holds that religion and science are mutually supportive. Renowned scientist Mr. C.V. Raman had said that the 20th century may belong to science but the 21st century will be the century of scientific spirituality.