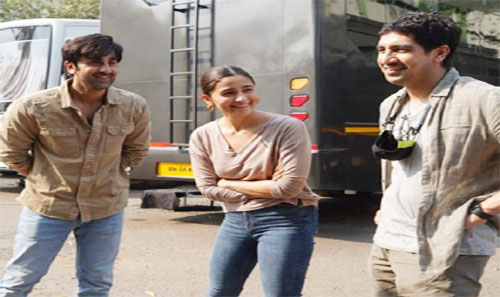 After shooting for nearly 190 days, the Brahmastra shoot is finally in the last leg, nearing its completion. The Ayan Mukerji directed action fantasy adventure features Ranbir Kapoor as Shiva, Alia Bhatt as Isha, with Amitabh Bachchan as the Guru, Nagarjuna as an archaeologist and Shah Rukh Khan in a guest appearance playing the role of a scientist. Touted to be the biggest Bollywood film, the makers have already confirmed a Brahmastra trilogy and we at Pinkvilla now bring an exclusive update on the plans for Brahmastra 2.
Apart from working on the edit and post production of Brahmastra, Ayan has also worked on the script of its sequel in the lockdown with the vision to ensure that it goes on the floors without much delay. A source informs us that Karan Johar (producer), Ayan and co are planning to introduce another character for Brahmastra 2, a glimpse of which might be given in the end credit of first part. “Brahmastra is the journey of Shiva, while part two will be about another character, Dev, who is also blessed with unique superpowers. The makers are looking to cast an actor from the top bracket for the sequel as well, in-fact, they have already started conversations with some A-List superstars,” the source informed.

“Shiva and Isha too will be a part of part two, since the world of Brahmastra will always be incomplete without the pioneers of the franchise, but the script has got more to do with Dev’s character. All the principal characters then come together for the final showdown in third instalment. It’s more of a universe, and if Ayan succeeds, there also lies a possibility of making standalone films showcasing the back story of several fascinating characters, who have a relatively smaller role in the already planned trilogy. But it all depends on the audience reception.”

The idea of this franchise is to root the characters in the modern world deep down in the Indian mythology, and a glimpse at two lead character names – Shiva and Dev - gives away the intent of the makers. The trilogy is about the fight to conquer the most powerful weapon of the universe, Brahmastra, that’s split in three parts, hidden in different parts of the world. Since Ranbir and Alia don’t have as big a role in Brahmastra 2, they have signed on for multiple films having a line up in place. In the same time, Ayan is expected to shoot for the sequel, and then everyone will get back together to put an end to the trilogy. However, as they say, the future of the Brahmastra universe at first depends on the box-office outcome of part one. Well, these are ambitious plans and we hope, Ayan succeeds in translating his vision to spectacle on the big screen and finds appreciation from the audience, as we do want to see the universe of this action fantasy adventure.

Brahmastra is currently looking at a release in the last quarter of 2021, however, a lot depends on the on-ground scenario with respect to covid, competition around that period in the film industry, as a film made on a budget as huge as Brahmastra can't afford a release in uncertain enviornment. The shoot is expected to be wrapped up by the end of this month.