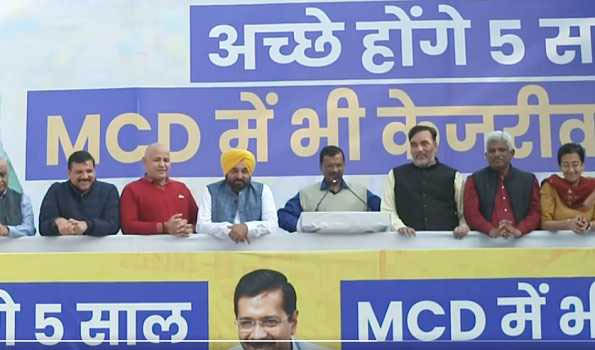 According to the State Election Commission (SEC), the Arvind Kejriwal-led AAP has won 134 seats out of the 250 Wards.

The BJP, which left no stone unturned and was eyeing to retain power, won 104 seats, the data showed.

As per the poll panel, Congress bagged nine seats, followed by Independent three.

Elated over his party's performance, Delhi Chief Minister and AAP convenor Arvind Kejriwal while addressing the party workers, expressed his gratitude to the people of Delhi for reposing faith in AAP.

Deputy Chief Minister Manish Sisodia also expressed his gratitude to the people of Delhi and said, "Thanked them for trusting Aam Aadmi Party in Delhi MCD".

"For us, this is not just a victory, it is a big responsibility," he added. The polls for 250 wards in the national capital were held on December 4.

There were a total of 1,349 candidates in the fray and the voter turnout was around 50 per cent.