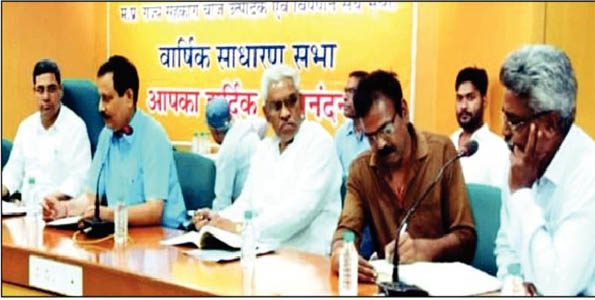 Bhopal: The seventeenth annual general meeting of MP State Cooperative Seed Producer and Marketing Federation, Bhopal, was held on the fifth floor of Subhash Yadav Bhawan under the chairmanship of Director of Seed Association and Managing Director of MP State Cooperative Bank Marya, Shri PS Tiwari. Representatives of primary seed producer cooperatives of the entire state were present in the meeting. Deputy Commissioner Cooperative and Marketing Cell in-charge Shri Arun Mishra and Special Duty Officer of Honorable Cooperation Minister Shri Sanjay Mohan Bhatnagar were also present in the meeting as representative of Commissioner Cooperative and Registrar Cooperative Societies.
In the general assembly, the progress of the year 2021-22 and the work plan for 2022-23 related to the lifting, distribution and production of breeder seed by the Seed Association was approved. The income-expenditure (budget) for the year 2023-24 of the union was approved. The audit notes received from the Commissioner Cooperatives and Registrar Cooperative Societies for the year 2020-21 and the year 2021-22 were also approved by the general assembly.
Presiding over the meeting, PS Tiwari in his remarks congratulated all the seed committees on the seed production program being taken by the seed societies and the contribution of 80% in the entire government institutions from the cooperative sector. He assured that the Seed Association and Apex Bank are always ready for the interests of the seed societies and farmers. He called upon the seed committees to run the warehouse-cum-processing center set up by the Seed Association.
The subject-wise presentation of the general meeting was done by the Managing Director of the Beej Sangh AK Singh. All the subjects were approved by the General Assembly unanimously and by voice vote. The committees were urged to get all the information posted by the Managing Director on the web-portal www.beejsangh.org prepared by the association. The representatives of the Seed Producer Committee also presented their suggestions in the general meeting.