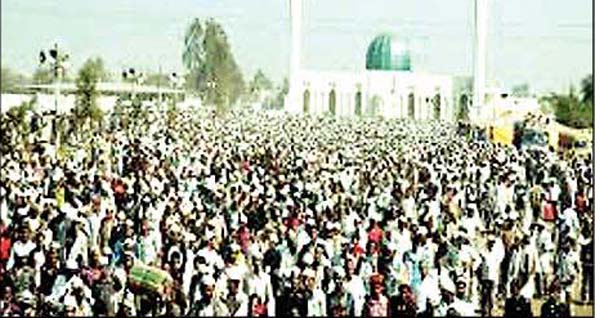 Chronicle Reporter, Bhopal
The Alami Tablighi Ijtima which held every year in the capital was not organized for two years due to Corona. Now after the situation becomes normal, this religious congregation to be held in the month of November will be of four days this time. It will starts from 18 and will conclude on the fourth day on 21st November with Dua-e-Khas (Special Prayer).
Only people from different states across the country will participate in this event. However Jamats (Group) coming from abroad will not be invited for the time being. Atiq-ul-Islam, a member of the Aalami Tablighi Ijtima Committee, told that this year Ijtima will be organized in the month of November. Starting from 18, it will conclude with Dua-e-Khas on the fourth day on November 21. It was canceled in the year 2020 due to Corona pandemic. In the next year (2021), the organizing committee itself decided not to organize this congergation. Preparations will be started soon for this religious event to be held in Eitkhedi. PWD, PHE, Electricity Department, Municipal Corporation etc. have been informed for necessary works at the venue. While the district administration for the arrangements and the police administration have also started making their plans for the security arrangements. Thousands of people from across the country will participate in this event. To address whom many big Ulema (Islamic scholars) of the country will come.
For the first time, the Jamats of other countries will not participate: This will be the first time in the 75 years of Aalami Tablighi Ijtima history that the community of any other country other than India will not be included in it. The Ijtima responsible have taken this decision to prevent the spread of diseases and their dangers around the world.
Ijtima being organized since year of independence
Bhopal Ijtima, which ranked third in the world's largest religious congregation, started in the year 1947 with the participation of only 13 people in Masjid Shakur Khan located in old city of Bhopal. The following year, after the Tajul Masjid was completed, the event was shifted here. Due to the increasing number of Jamats in the event held here for a long time, it was shifted to the Eitkhedi. It is being organized at this place for more than a decade and a half. Now the number of people participating in it has reached in lakhs.

Ijtima will start from November 18