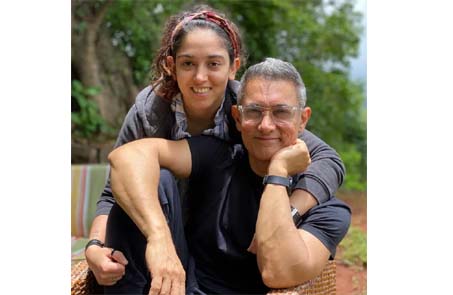 Tuesday kicked off on a curious note for Aamir Khan's daughter Ira Khan as she came across an old video of her dad's workout. Looking at the old video of her father sweating it out at the gym with his trainer, Ira was curious to know what sort of workout he was doing. In the throwback video, the Laal Singh Chaddha star seemed to be working on his core by performing the 'suspended alternative dumbbell press'. Mr Perfectionist surely had nailed his workout back in the day when the video went viral during Dhoom 3 days.
Now, as Ira came across the video, she seemed to be left curious about his workout. Taking to her Instagram story, Ira reposted the video and wrote, "What is that exercise?"  The Laal Sing Chaddha star, in the video, could be seen lifting dumbbells in his hands while his body was suspended in the air. Aamir was seen clad in a casual tee with shorts and sneakers in the throwback video as he worked on his body for his film Dhoom 3 back then.
The trainer, who had shared the video featuring Aamir, also shared the benefits of the workout with everyone. Clearly, it seemed that Ira wanted to know more about her dad's workout back in the day. Ira too loves to keep up with her fitness regimen and she makes sure she keeps her followers updated about her fitness journey. She is currently dating fitness trainer Nupur Shikhare and often, the two are seen working out together on her Instagram live sessions.
Even on her birthday this year, Ira had done an Instagram live session where she and Nupur had spent time sweating it out.
Aamir, on the other hand, is occupied with the shoot of his film Laal Singh Chaddha. The film also stars Kareena Kapoor Khan, Naga Chaitanya and Mona Singh. It is an official adaptation of Forrest Gump starring Tom Hanks. The film is slated to release on Christmas 2021. It is helmed by Advait Chandan.