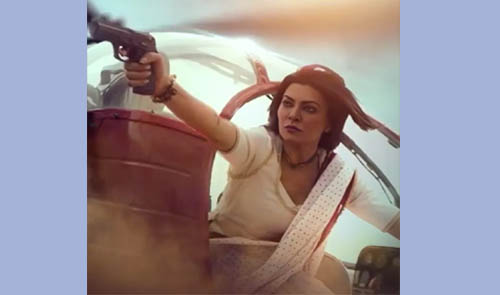 Sushmita Sen has been keeping fans updated about Aarya season 2. It is helmed by Ram Madhvani and season 1 gained a lot of appreciation and now the makers have announced that the second season is coming soon. They have also released a motion poster which was shared by the actress on her social media handle. The post mentions that the trailer of the crime thriller will be releasing today.
Sharing the poster, Sushmita writes, “#trailercoming #AARYA2. The sherni is back! Sabko batao! Be a share-ni. Official trailer of #HotstarSpecials #AaryaSeason2 drops tomorrow only on @disneyplushotstar @officialRMFilms @endemolshineind @madhvaniram @amitamadhvani @vinraw @bluhills @siabhuyan @rheaazz.” In the motion poster, Sushmita Sen is seen onboard a helicopter, with her hand-gun pointed at the baddies. Clad in a saree, Sushmita is all set to enthrall the audience once more with her performance in Aarya 2.
As soon as she shared the post, fans dropped smile emojis. One of the users wrote, “Can't wait to see u again m'am.” Many wrote, “Can’t wait”.
Apart from Sushmita Sen, the first season starred Chandrachur Singh, Namit Das, Ankur Bhatia and Vikas Kumar. The actress had made her debut on the digital platform through this series. She also received the award for Best Actress – Female, at the Filmfare OTT Awards.