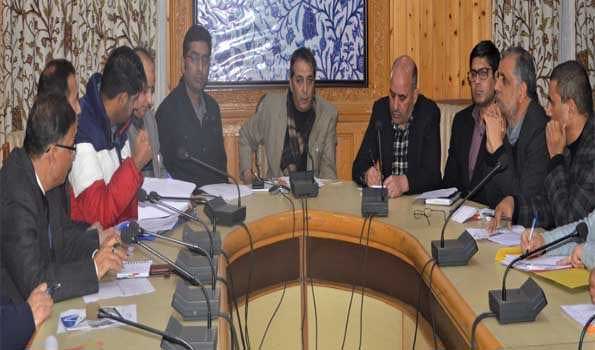 Srinagar, About 830 players from different parts of the country are scheduled to participate in 30 events of the Ist ever Khelo India-winter games being held at world famous ski resort of Gulmarg from Saturday, an official spokesman said on Thursday.Health Department will screen all players at Airport and on National Highway to check Coronovirus symptoms. In case of any exigency, department will initiate immediate measures for particular case.All arrangements are in place for successful conduct of the mega national event, he said.He said Divisional Commissioner, Kashmir, Baseer Ahmad Khan chaired a high-level meeting on Wednesday to review all arrangements put in place for the Winter Games under Khelo India (a National Programme for development of sports). The mega national event will commence from March 7 and will conclude on March 11 at Gulmarg.

The meeting was informed that 830 players from different parts of the country will participate in 30 events which include Snow Skiing, Snow Boarding, Cross country, Snow show, Snow Cycling and other snow-based events.To provide hassle-free facilities to players and other concerned, threadbare discussion were held in the meeting regarding Facilitation Centre, Hospitality & Protocol services, receiving of guests, transportation & plan, Boarding & Lodging, procurement of materials & equipment, technical requirements, press publicity, cultural programme, food, maintenance of snow slopes, area domination, security, magistracy, medical camps, event management and other arrangements.The Divisional Commissioner directed officers concerned to set up round the clock control rooms at Srinagar, Tangmarg and Gulmarg in which officers from PHE, PDD, Medical, Police, SDRF and concerned Magistrates will sit in it to monitor all activities with backup plan till the culmination of the mega sporting event.

The Deputy Commissioner Baramullah will set Media centre in Gulmarg in which all requisite facilities should be provided to the national media. Besides, he will establish medical camps at various locations with doctors, orthopadecians, other staff with medicine and ambulances.Health Department will screen all players at Airport and on National Highway to check Coronovirus symptoms. In case of any exigency, department will initiate immediate measures for particular case.
Chief Executive Officer (CEO) Gulmarg Development Authourity (GDA) will supervise all arrangements and submit daily report to Deputy Commissioner Baramullah.The Divisional Commissioner issued various directions to the officers concerned and exhorted for inter departmental coordination so that the national mega event become a grand success.