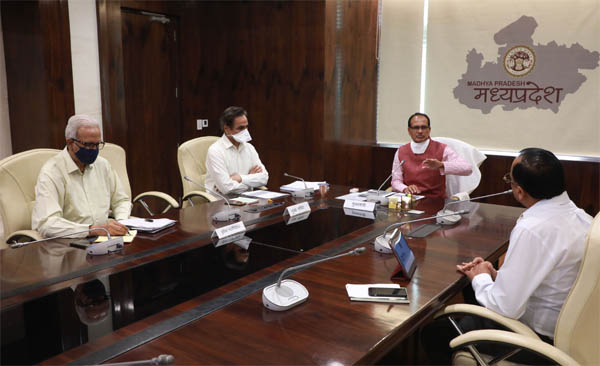 Chronicle Reporter, Bhopal
Chief MinisterShivraj Singh Chouhan has said that no private hospital should charge more than the rates fixed by the government for the treatment of Corona. Action will be taken against private hospitals for charging more than the prescribed rates. It must be ensured that the hospitals do not charge more than the fixed rate for the RTPCR test. Chief Minister Chouhan said that availability of adequate number of beds should be ensured at tehsil and development level along with big cities in view of Corona infection. Along with government, cooperation of private hospitals should also be sought.
Chief Minister Chouhan was reviewing the Corona situation in Mantralaya through a video conference. Those present in the conference included Chief Secretary Iqbal Singh Bains, Additional Chief Secretary Health Mohammad Suleman, Additional Chief Secretary HomeRajesh Rajaura and Director General of PoliceVivek Johri. Chief MinisterChouhan held a discussion with the Dean of Gwalior, Indore, Jabalpur Medical College, Dr. Bhandari of Indore, and doctors of LN Medical College of Bhopal and People’s Medical College, Bhopal. Chief MinisterChouhan also inquired about the actual status from the OIC in charge of various districts through video conference.
If you do not apply masks, you will become a partaker of sin
Chief Minister Chouhan said that in this war against Corona, victory will be possible only with the cooperation of the people. We must reduce nervousness, fear or mistrust among people. Corona can be overcome by making people take preventive measures like wearing masks, social distancing, etc., with understanding and love. People will have to be made to understand that if they do not wear mask they will be partaker of the sin of spreading the infection. ‘Kill Corona-II’ campaign will be launched against Corona infection.
Extensive discussion to be held for effective management
Chief Minister Chouhan said that it is necessary to take feedback of government, private hospital managers, medical experts, paramedical staff, district administration and general public regarding control of Covid infection and management of patients. Management will be more effective with extensive discussion. A Corona Volunteer campaign is being launched to seek the support of the general public. Also, people will be made aware on the theme of ‘Mere Parivar ki Suraksha Meri Zimmedari’ (Protection of my family is my responsibility).
Admission protocol will be developed
Chief Minister Chouhan said that all the districts have been given new targets to increase testing. All districts should immediately increase testing in accordance with the goal. Home isolation should be encouraged and only those seriously affected by infection should be admitted to hospitals. In this regard, a definite admission protocol should be developed and implemented in the entire state.
In weddings, information about number of guests and from where they are coming must be sought
Chief MinisterChouhan said that adequate vigilance is needed in marriages. It is necessary to obtain permission for weddings and to limit the number of guests. Information about how many people will come from the place of marriage, must also be sought. This is a time of crisis, this type of restriction is necessary for safety.

In Ratlam, all shopkeepers above 45 are being vaccinated
Chief Minister Chouhan sought information from the OICs of various districts under their charge about the status of Corona infection, availability of beds, testing and possibility of increase in number of beds, etc. OIC of RatlamAnupam Rajan informed that work is being done to make vaccination compulsory for all shopkeepers above 45 in Ratlam. OIC of Barwani Vivek Porwal said that there is information about booking of beds in advance in private hospitals. Arrangements are being made to ensure the availability of beds to the actual victims. Instructions were given to create an environment for masks in rural areas in districts adjoining Maharashtra including Chhindwara.
Bhopal and Indore have the highest positivity rate in the state
It was informed in the video conference that Madhya Pradesh ranks seventh in the country in Corona infection. In the last seven days, the average positivity rate of Indore is 15 percent, 19 percent of Bhopal, 11 percent of Jabalpur, 08 percent of Gwalior, 09 percent of Ujjain, 15 percent each of Khargone and Ratlam, 13 percent of Betul and 16 percent of Barwani and 07 percent of Chhindwara. The number of new cases is 788 in Indore, 549 in Bhopal, 236 in Jabalpur, 146 in Gwalior, 98 in Ujjain, 85 in Ratlam, 75 in Khargone, 73 in Barwani, 65 in Katni, 62 in Chhindwara, 61 each in Betul and Narsinghpur, 56 in Seoni and 51 in Shajapur. The number of cases in 23 districts of the state is between 50 and 20 and in 15 districts the number is below 20.