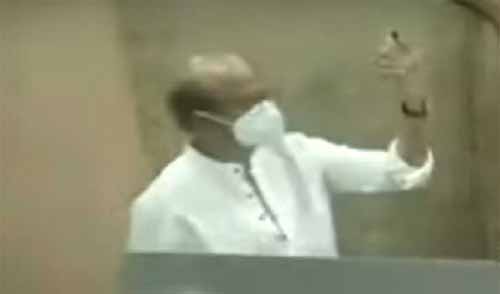 Chennai, Apr 6 (UNI) Prominent actors, Rajinikanth, Ajith, actor-politician and Makkal Needhi Maiam (MNM) Foundr Kamal Haasan Deputy Chief Minister O Panneerselvam, and Opposition DMK President M K Stalin are among the early voters to exercise their democratic right, as polling to elect the 16th Tamil Nadu Assembly began at 0700 hrs today morning.
Ajith, accompanied by his wife Shalini, arrived at a polling booth in the city even before the commencement of the process, and cast
their ballots.
Barring for some minor glitches in the Electronic Voting Machines (EVMs), that delayed the polling process, brisk turn out is reported
in various booths across the State as people, in a bid to beat the searing hit--Tamil Nadu in the grip of intense heat wave for the last
few days--turned up early to cast their ballots.
Following Ajith, is Rajinikanth, who had initially expressed his intentions to enter politics and contest this polls before backing out citing health  reasons and the prevailing COVID pandemic, voted at the Stella Mary's College booth in the city.
Top leaders, including Telangana and Puducherry Governor Ms Tamilisai Sundararajan cast her ballot in a booth in the city, former Union Minister and Senior Congress leader P Chidambaram voted in his native Sivaganga district, while Kamal, accompanied by his daughters Shruti and Akshara Haasan, Mr Stalin, along with his wife Ms Durga Stalin and son Udhayanidhi Stalin, after paying tributes at the memorial of his father and late DMK patriarch M Karunanidhi and C N Annadurai at the Marina beach front  also cast their ballots.
Udhayanidhi, who is also the DMK youth wing secretary, made his electoral debut from Chepauk-Tiruvallikeni seat in the city.
Mr Panneerselvam, who is contesting from the Bodinayakanur seat in his native Theni district, DMDK Founder and actor Vijayakanth's wife and party Treasurer Ms Premalatha, contesting from Vridhachalam earlier represented by her husband, PMK Founder Dr S Ramadoss were among the early birds to cast their votes.
Talking to reporters Ms Tamilisai urged the voters to follow the social distancing norms, wear face masks and dispose the disposal gloves at the appropriate place.
Mr Chidambaram exuded confidence that the DMK-led alliance will win the polls by a big majority and form the government.
Mr Stalin told reporters that people are enthusiastically turning up at the polling booths to cast their votes.
He said there is an anti-incumbency wave and it could be seen in the people's mindset which is against the ruling AIADMK.
He said the outcome of the polls on May two will be very good.
Mr Panneerselvam said the AIADMK will win the polls by a bigmajority and form the government for the third successive term.
Meanwhile, reports from districts said voters reached the booths even before the polling process began and all voters were sanitised
and plastic gloves given to them for protecting themselves from  the COVID-19 infection.