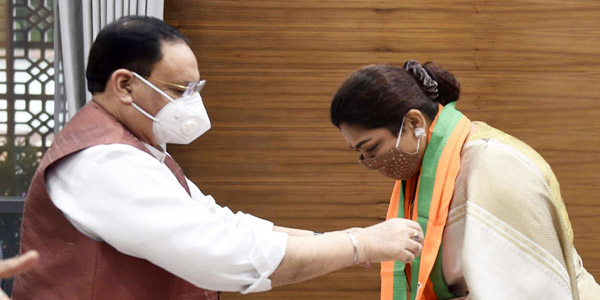 In the programme, Ms Sundar said that she believed that it is time to take the country forward. ‘It is a matter of luck that we have the strong leadership of Prime Minister Narendra Modi and the countrymen believe that under his leadership, the country is safe and on the path of progress,’ she said.

Ms Sundar said that from now on she is a fully dedicated worker of BJP and whatever responsibility the party entrusts her with, she will fulfill it with full devotion. She also pledged to work hard to win the BJP in Tamil Nadu elections next year. Ms Sundar is a well-known name of the beautiful cine world. Apart from Tamil, Telugu, Kannada and Malayalam. She has also acted in more than 200 films in Hindi and Bhojpuri. Ms Sundar joined politics in 2010 and joined the DMK and joined the Congress in 2014 where she was made the spokesperson. She has now left the Congress and joined the BJP.