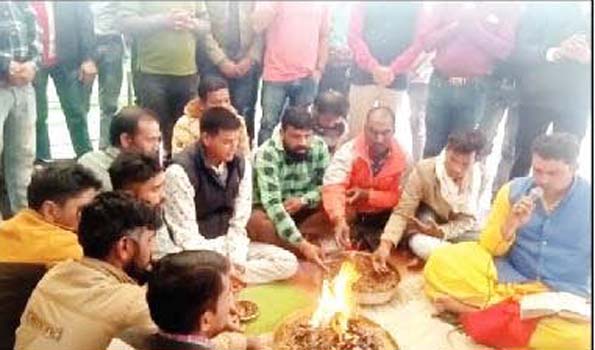 Bhopal: The stop work agitation for the demand of departmental consolidation of 45 thousand power outsourcers of MP and regularization of 5 thousand contract workers continued in all the 52 districts of MP including the capital for the second day today. These contractual employees are adamant and they sent 500 memorandums to the Chief Minister in the last 5 years, but now the Chief Minister should find a middle way by talking directly.
Electricity outsourced contract workers, after protesting at Pt Khushiram Sharma Maidan, performed Mahayagya for the wisdom of the state government in the ancient Ram Mandir located at Tin-shed, this Yagya was performed in all 52 districts today. State convenor of MP Electricity Outsourced Employees Association Manoj Bhargava and State President of Contract Officers Association Arun Thakur say that 'when states like Andhra Pradesh, Uttarakhand, Odisha, Bihar, Punjab, Himachal Pradesh regularize their contract workers in the country. So why is the MP government shying away from regularizing?
Bhargava says that the electricity outsourced workers working in MP for many years should be merged departmentally by making them small and small cadres on the basis of their qualification and efficiency. Due to this, 25 percent of the amount of Rs. 300 will be saved by the MP government every year and the contract workers will be freed from the exploitation of the contractors. Gujarat model should be adopted in MP power sector, where only 2 percent outsourcing is there, while 98 percent outsourcing is applicable in MP. In protest against which the electricity outsourced contract workers will continue their agitation on the third day tomorrow as well.
Dhanprasad Ahirwar, Vijay Parashar, Nikhil Yadav, Sandeep Nimbolkar, Shekhar Singh Raghuvanshi, Anand Malviya, Vikas Radve, Sandeep Vahane participated prominently in the strike-demonstration and Sadbuddhi Mahayagya.