Agnipath impact will be seen in war: Rahul 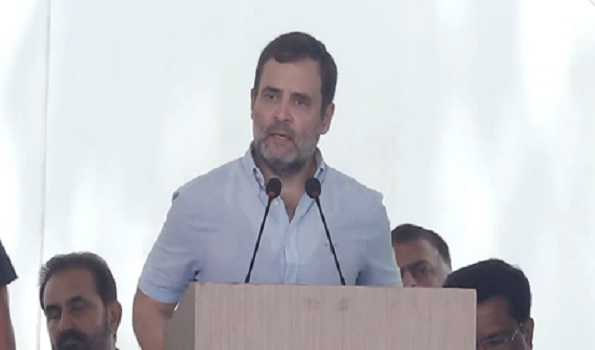 New Delhi,(UNI) In his strongest attack on Agnipath, former Congress President Rahul Gandhi on Wednesday said the controversial military recruitment scheme will destroy the army and said the consequences will be visible when India faces a war.

Addressing party workers and leaders at the Congress headquarters here, he said his questioning by the Enforcement Directorate (ED) was not a major issue while the future of the Indian youth was a bigger concern.

He also said after questioning him, ED officials realised that Congress leaders were not scared. "I was not alone at the ED office for five days, all of you were with me," he told cheering party workers.

"Those who interrogated me understood that Congress leaders cannot be scared because truth does not lack of patience."

Rahul Gandhi expressed concern over the widespread unemployment in the country and said the government had the destroyed small and medium industry which used to provide employment to a huge number of people.

"Prime Minister (Narendra) Modi has broken the backbone of this country. This country will not be able to provide employment to it's people.

"Modi has handed over the country to 2-3 crorepatis. The last opportunity of employment left for youth were the armed forces, even that has been shut now.

"They used to talk about One Rank One Pension, now it is No Rank No Pension."

Rahul Gandhi went on: "China has captured our land, the government should empower the forces. Instead, they are weakening the forces. The result will be seen when a war happens."

He also said the Agniveers will struggle for employment like others after retiring after four years as mandated from the armed forces.

Rahul Gandhi was questioned by the ED for over 50 hours over five days since June 13.

As per a complaint filed in the court of the Metropolitan Magistrate, Associated Journals Ltd (AJL) took an interest free loan of Rs. 90.25 crore from the Indian National Congress, which was not paid back.

The Congress has maintained there is no money laundering involved and has called the summon a politically motivated move.