Agriculture Infrastructure Fund will change condition of agriculture and farmers 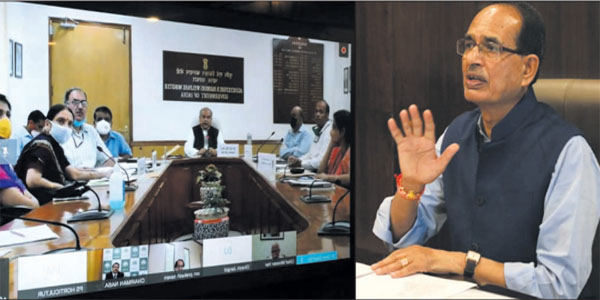 Chief Minister Shivraj Singh Chouhan today took part in a detailed discussion in a video conference with the Union Agriculture, Farmers Welfare, Panchayat Raj and Rural Development Minister Narendra Singh Tomar on the implementation of Agriculture Infrastructure Fund. Union Minister Tomar held a discussion with states about infrastructure fund in agriculture sector under Atmanirbhar Bharat in the video conference and urged them to make the project successful, prepared by the Prime Minister Narendra Modi for the prosperity of farmers.

Officials of the Union Ministry of Agriculture described the advance initiative taken in Madhya Pradesh to take advantage of the provisions of Agriculture Infrastructure Fund through Atmanirbhar webinars as an ‘exemplary’ for other states. Both the Ministers of State of the Union Ministry of Agriculture and Farmers Welfare, Purushottam Rupala and Kailash Chaudhary, besides Chief Minister of Haryana, Manohar Lal Khattar, Chief Minister of Uttarakhand Trivendra Singh Rawat and Agriculture and Cooperatives Ministers of Himachal Pradesh, Gujarat and other states were present at the video conference of Union Agriculture Ministry.

Chief Minister Chouhan assured the Union Minister that well-planned efforts will be made in Madhya Pradesh to double the income of farmers by the year 2022. Department of Agriculture, Cooperative and Horticulture have commenced activities in this direction. The formation of State Level Monitoring Committee and District Level Monitoring Committees on behalf of the Department of Agriculture, aims to expand the Farmers Producer Organizations (FPO) as a movement.

Instructions have been given to send at least two proposals from every block under the scheme. Two committees comprising officers of Cooperatives Department, Apex Bank and MARKFED have been constituted on behalf of the Cooperatives Department including officers of Government undertakings NABARD and NCVC. As per the laid down norms, 263 District Level Primary Agricultural Credit Cooperative Societies (PACS) and 54 Marketing Societies have already been identified.