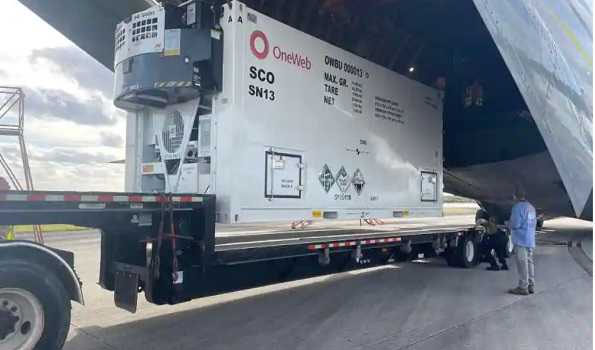 Chennai, Jan 25 (UNI) The aircraft carrying second batch of 36 satellites of the UK-based Oneweb today left for India and is on its way to Chennai to be taken to the spaceport of Sriharikota, about 100 km from here, by road for launch by the Indian Space Research Organisation (ISRO).

The Antonov aircraft has left for Chennai, Oneweb tweeted, along with the photographs of loading of the satellites and the aircraft taking off.

"Our satellites have now been loaded ahead of our upcoming launch with  @isro", the tweet said.

"This is the final time we will load up an Antonov aircraft with our satellitesfor Gen1, demonstrating how close we are to truly global connectivity", it said.

After the second batch satellites were launched, Oneweb will have two more  missions to complete the constellation.

The first batch of 36 satellites was successfuly launched by heaviest launch vehicle LVM-3, previously called as the GSLV-MkIII, from the SHAR Rangeon October 23, 2022, marking ISRO's historic entry into the 'Global Commercial Launch Service Market' in a dedicated commercial mission.

About 20 minutes after lift off, all the satellites were successfully injected  into the Low Earth Orbit (LEO).

The 43.5 m tall three-stage vehicle, with a total lift-off mass of 644 tonnes, had placed the satellites into a circular LEO of 601 km with an inclination of 87.4 Deg to the equator.

The October 23 mission is the fifth flight of LVM3 and with this launch, LVM3 made its foray into the 'Global Commercial Launch Service Market', to carve a niche for itself as done by ISRO's most trusted, workhorse and versatile

It is the first multi-satellite mission with 36 OneWeb Satellites to the LEO as the heaviest payload mass of 5,796 kg of LVM3 till date.

It was the first commercial mission of LVM3, first multi-satellite mission with 36 OneWeb satellites onboard, First launch of LVM3 to LEO, First Indian rocket with six ton payload, First NSIL mission with LVM3 and the First OneWeb Mission  with NSIL/DoS.

OneWeb is a global communication network powered from space enabling connectivity for governments, businesses and communities. It is implementing a constellation of LEO satellites.

India's Bharti Enterprises serves as a major investor and shareholder in OneWeb.

This is OneWeb's 14th launch and with ISRO and NSIL opens up the space sector in India.

The constellation will have a total of 648 satellites.

OneWeb Constellation operates in a LEO Polar Orbit. The Satellites are arranged in 12 rings (Orbital planes) with 49 satellites in each plane. The orbital planes are inclined to be near polar (87.9 Deg) and are 1,200 km above the Earth.

Each satellite completes a full trip around the earth every 109 minutes. since the earth is rotating underneath the satellites, they will always be flying over new locations on the ground.

ISRO said in full service, each plane will have 49 satellites equal to 588 satellites.

The first Oneweb Mission in a way was Russia's loss and India's gain.

Till recently, OneWeb has been launching its satellites by Russian rockets after inking a pact with Russian Space Agency Roscosmos.

Since the break out of Russia-Ukraine war, OneWeb has suspended its cooperation with Roscosmos and turned to the Indian Space Agency for launching its satellites.

The rocket can carry a payload of up to ten tons for placing satellites in LEO.

OneWeb will connect towns, villages, and local and regional municipalities in the hardest -to-reach areas, thus playing a critical role in bridging the digital divide across India.