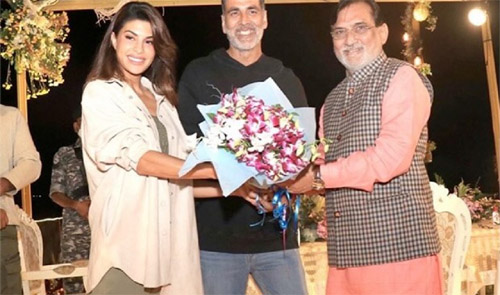 There's no slowing down Akshay Kumar! The actor who has a series of films lined up has now kickstarted the shoot of Ram Setu with Jacqueline Fernandez in Daman. The film's first schedule was a rocky one as several cast and crew members tested positive. The squad's Ooty schedule was recently completed. Now, the second schedule was slated to kick start in Sri Lanka.
However, a source from the crew informed the IndiaToday team that because of permission complications, Ram Setu will instead be shot in Daman. Dadra and Nagar Haveli, Daman-Diu and Lakshadweep's administrator recently met Akshay Kumar and Jacqueline Fernandez in Daman amidst the shoot of Ram Setu.
Patel took to Twitter to share photos from their meeting. He also tweeted that Akshay Kumar thanked U.T administration for their support and also praised Daman's beauty. His tweet read, "Bollywood actor and celebrity @akshaykumar and actress @Asli_Jacqueline, who were the guests of Daman for shooting of the film "Ramsetu", met today. Akshay thanked the U.T administration for immense support & praised the beauty of Daman."
Apart from Akshay and Jacqueline, the film also features Nushrratt Bharuccha in the lead role.
For the unversed, Akshay will be seen playing an archaeologist in Ram Setu. The movie is centered on the fabled roots of the underwater bridge that links Sri Lanka and India. The filming of Ram Setu was stalled after crew members tested positive for the new Coronavirus during Diwali last year. On the Ooty set, Jacqueline and Akshay shot a song as well as other key parts.