Ali, Mariam and SimSim of 'Alibaba Dastaan-e-Kabul' in Bhopal 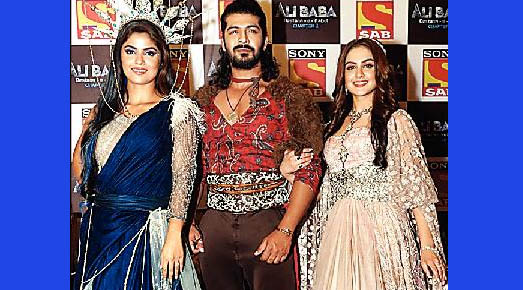 Thank viewers for their support
Sony SAB's 'AlibabaDastaan-e-Kabul' has been winning the hearts of the viewers since its launch in August. Replete with a new perspective on the popular Alibaba tale and packed with an engaging narrative, the series has been making a mark with growing affection for the characters and talent, including Alibabaand Mariam who are being adored for their chemistry.
Thanking viewers for their appreciation and support for the show and their performances, the key cast including Sheezan Khan (playing the character of Alibaba), Tunisha Sharma (playing Mariam) and noted actor Sayantani (essaying the role of SimSim) visited the city of Bhopal to interact with people and share their gratitude for supporting them in this journey.
Speaking about his journey on the show, Sheezan Khan who plays Alibaba commented, "While the universe conspired to bring Ali and Mariam together, they both seem unaware of what the future holds for them. As they try to overcome one hurdle, another inevitably knocks on their doorstep. But Ali will definitely find a way out to overcome all the problems and viewers will enjoy his journey. We're nothing but grateful for the love and support from the audience. The warm welcome from Bhopal is unforgettable and we look forward to many such interactions in the near future!"
Tunisha Sharma who essays the role of Mariam states, "When Ali and Mariam are together, they can face any issue with great courage. The viewers are absolutely in love with Ali and Mariam’s chemistry. We get great feedback from the viewers through DMs, comments, messages, and we are glad that our efforts are being acknowledged by them. Nothing motivates an actor more than receiving the support from the viewers. The way Bhopal is responding to Ali and Mariam has been such a rewarding experience. All my love, always!"
SayantaniGhosh who appears as SimSim on the show comments, "SimSim is very unique and although she is an antagonist, she has a lot of depth to her personality. She is led by her emotions; unlike the stone-cold negative characters we see on screen. I’m overwhelmed with the immense love that has been showered upon SimSim. It gives me the energy to work with passion and dedication. I am glad for all the appreciation my character has been receiving."
Alibaba is set to write the destiny of Kabul with his bravery. His love as a doting father to the orphans adds to his bravery in the show. Fighting against all challenges and evil plans by SimSim, the lives of Ali and shehzaadi Mariam are entangled like the two halves of the talisman. In the latest track, Mariam tries to escape the wicked slave traders while Ali races against time to help her.
What misfortunes await Ali and Mariam in their mission to redefine the destiny of Kabul? Will SimSim and Saddam succeed in breaking their spirit?