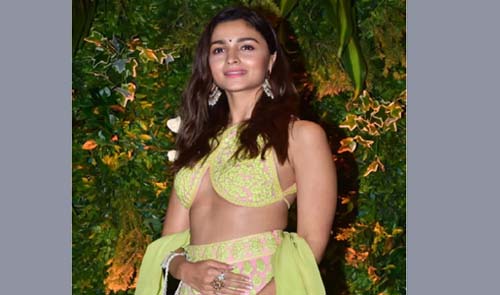 The wedding season is officially in order and several grand weddings have already taken social media by storm. One of them was Anushka Ranjan and Aditya Seal's wedding which saw several Bollywood stars in attendance. Alia Bhatt, Vaani Kapoor and Bhumi Pednekar among others were present for all festivities as they celebrated Anushka's big day.
While several videos and photos surfaced on social media, we got our hands on one new video of Alia and Bhumi Pednekar dancing their hearts out. The video is from Anushka and Aditya's sangeet in which the actresses took to the dance floor and danced the night away.
In the video, Alia and Bhumi can be seen grooving to the hit Punjabi track Lamberghini along with the bride's sister Aakansha Ranjan.
Alia made heads turn at the Sangeet with her stunning subtle neon lehenga.  While the lehenga was all things beautiful, it was Alia's blouse that made maximum noise on social media.
Post the Sangeet, Alia slipped into a sequin dress for the after party. Not just that, she also looked breathtaking in a yellow saree for the main wedding ceremony. Despite her busy schedule, Alia was present for all three days of festivities. As for Bhumi, the actress stunned in two different sequin lehengas.