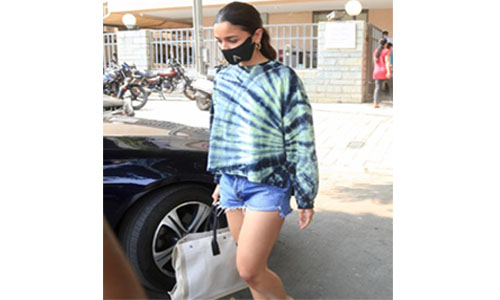 Actress Alia Bhatt made a quick visit at the eye clinic in Mumbai on Wednesday. The Brahmastra star was snapped in casuals as she was walking towards the car after her visit.

Actress Alia Bhatt has been in the news over the past few days.  On Tuesday this week, Alia shared an update regarding her film Brahmastra with Ranbir Kapoor and left fans excited as new photos of the two with Ayan Mukerji and Nagarjuna Akkineni took over the internet. Now, on Wednesday, Alia headed to an eye clinic in the city and was caught in the frame by the paparazzi. The star has been keeping busy with work and amid this, she headed out in the city.

As she visited the eye clinic, the paparazzi waited for her to come out and when she did, she was clicked by them. In the photos, Alia is seen opting for a green and white tie-dye top with denim blue shorts. She is seen sporting a black mask and her hair is neatly tied up in a ponytail. With it, she is seen carrying a huge bag and opted for comfy footwear. Alia accessorised the look with a pair of earrings.
As she came out, she acknowledged the paps from a distance and then headed towards her to leave from the clinic. Just yesterday, Alia was seen with Ranbir Kapoor and Neetu Kapoor at their new under-construction house in Mumbai.

Meanwhile, Alia and Ranbir reportedly have resumed the final leg of the Brahmastra shoot. While Nagarjuna Akkineni has completed his portions, it looks like Alia and Ranbir are yet to shoot some parts. The film is a highly awaited project that has fans excited for the past 3 years. Brahmastra is directed by Ayan Mukerji and produced by Karan Johar. The film also stars Amitabh Bachchan, Mouni Roy, Dimple Kapadia in important roles and Shah Rukh Khan will be seen in a cameo.